Bihar: Congress to get three berths in Nitish Kumar govt : The Tribune India 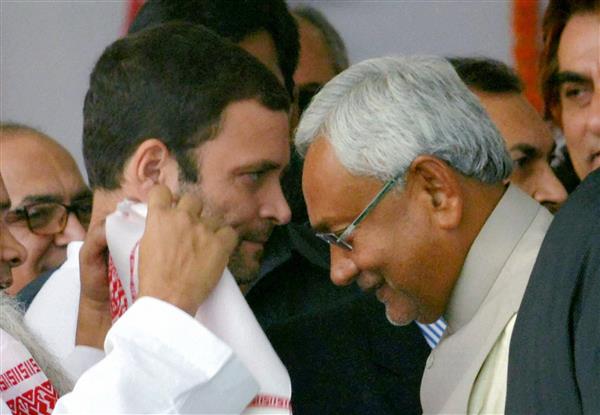 Congress MLAs, who will become ministers, yet to be decided. - File photo

The Congress will get three ministerial berths in the new Nitish Kumar government in Bihar, a senior party leader said on Sunday.

State Congress in-charge Bhakta Charan Das said two party MLAs would take oath as ministers on August 16, and one more legislator would be inducted when the next Cabinet expansion happened after that.

Two Cong MLAs will take oath on August 16, when CM Nitish Kumar is expected to expand his Cabinet. One more party MLA will be inducted when the next expansion takes place. Bhakta Charan Das, Cong leader

“Two Congress legislators will take oath on August 16, when the Chief Minister is expected to expand his Cabinet. One more party legislator will be inducted in the Nitish Kumar Cabinet when the next expansion takes place after August 16,” he added.

Das said the Congress MLAs, who will become the ministers, are yet to be decided.

“We will finalise the names of our legislators who will be part of the Nitsih Kumar Cabinet on Monday,” he said.

Earlier, Congress sources had indicated that the party was looking for four ministerial berths in the new government.

The Cabinet, which at present comprises only the Chief Minister and his deputy Tejashwi Yadav, is due for expansion on August 16.

Kumar had taken oath on Wednesday, a day after the JD(U) snapped ties with the BJP-led National Democratic Alliance (NDA) and joined hands with the RJD, the Congress and some other parties to form the Mahagathbandhan government.

At present, the grand alliance comprises seven parties — the JD(U), RJD, Congress, CPI(ML) Liberation, CPI, CPM and Hindustani Awam Morcha (HAM), which together have more than 160 MLAs in the 243-member Assembly.