Constitution a feminist document, gave women right to vote ahead of many western nations: CJI Chandrachud : The Tribune India 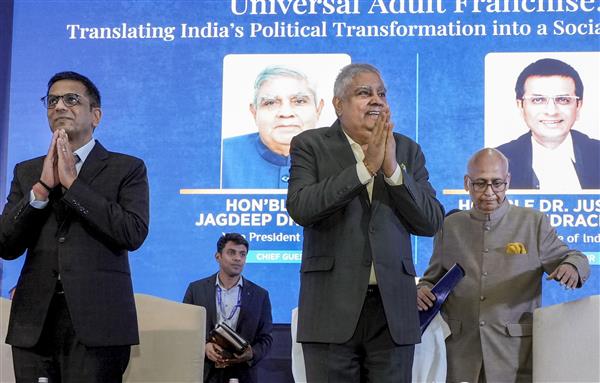 Describing the Indian Constitution as a feminist document which gave right to vote to women, poor and marginalised sections of society ahead of many western democracies, Chief Justice of India DY Chandrachud has said it’s truly a product of Indian imagination.

“The introduction of Universal Adult Franchise (UAF) was a revolutionary act at a time when such a right had only recently been extended to women, people of colour, and the working-class in supposedly “mature” Western democracies. In this sense, our Constitution was a feminist document, as well as an egalitarian socially transformative document,” the CJI said.

Speaking at the 8th Dr LM Singhvi Memorial Lecture on ‘Universal Adult Franchise: Translating India's Political Transformation into a Social Transformation', Justice Chandrachud on Friday said it was a break from the colonial and pre-colonial legacy and the boldest move adopted by the Constitution.

Highlighting that historically, power was concentrated in the hands of a few, the CJI said, “Those who were earlier denied rights and power now became a deciding force in selecting composition of parliament and thus UAF led to social transformation and it provided rights to social communities whose right to believe in themselves was also taken away.”

The drafters of the Constitution were aware that political equality would not be sufficient to remove social inequalities and universal adult franchise helped establish a sense of belonging and responsibility amongst citizens as equal stakeholders in the country’s progress.

Quoting Dr BR Ambedkar, he said the idea of universal adult franchise was non-negotiable. “Participation in the electoral process has to be looked at from the point of view of the ones who were not allowed to vote (earlier) but allowed by the Constitution. For the Dalits UAF played a key role," he said.

He said, “…the negotiations against the colonial power of the British Government were not by a uniform stream of thought. While few Indians demanded a share in the administration, leaders such as Jyotiba Phule were laying down the ground for an alternate picture of providing the chance to become part of the administration to everyone.”

Justice Chandrachud said, “The elite's perception that only educated or few individuals should have the right to vote shows contempt and distrust towards democracy.”

He said, “Electoral democracy has been an agent of pervasive change at the village and municipal levels. The reservation of seats for women and marginalized social groups in panchayats has given them the power to shape their own destinies. It is a silent revolution done by the Universal Adult Franchise.”

Noting that there were numerous examples of exemplary work done by women sarpanches or all-women panchayats in different parts of India, he said it demonstrated the bottom-up approach of governance.

Admiring DR LM Singhvi’s contribution to Panchayati Raj institutions in India, the CJI said, “The most significant achievement of the LM Singhvi Committee was that it led to the constitutional recognition of Panchayati Raj institutions in 1992 through the 73rd and 74th Constitutional Amendment Act, leading to the insertion in Part IX of the Constitution. These amendments gave a new dimension to the entire concept of democratic decentralization of powers to the rural people in India.”