Coronavirus a notified disaster, states can use funds : The Tribune India

Coronavirus a notified disaster, states can use funds 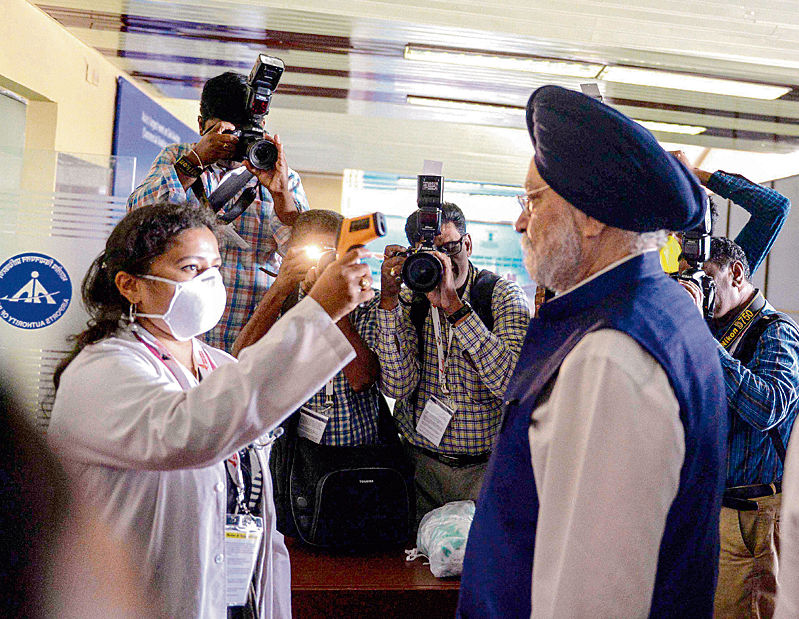 Anticipating a surge in Covid-19 cases, the Centre today declared the outbreak a “notified disaster” in India, enabling states to use state disaster relief funds for screening and containment efforts.

As Covid cases reached 84 with two reported deaths, the Ministry of Home in an order to the state Chief Secretaries said, “Keeping in view the spread of Covid in India and the WHO declaration on the disease, the Centre has decided to treat it as a notified disaster for the purpose of providing assistance under the state disaster relief fund (SDRF).”

Total cases in India so far

The government, however, did a flip-flop on the scope of compensation covered by the order. While the first order said the states could use the funds (SDRF) to pay ex gratia of Rs 4 lakh to kin of each patient who died of Covid and also pay government hospitalisation charges to coronavirus positive patients, the revised order dropped both these provisions.

Allowing use of funds only from the SDRF and not the National Disaster Relief Fund, the Centre said the states could use these funds to set up quarantine facilities and provide food, clothing and medical care to people isolated there. Besides, funds could be given for covering the cost of consumables for sample collection and for screening and contact tracing of positive persons. “Cost of setting up additional labs, cost of personal protective equipment for healthcare, municipal, police and fire authorities and cost of thermal scanners, ventilators, air purifiers and consumables for government hospitals can also be covered,” the Ministry of Home Affairs (MHA) said, adding that costs towards quarantine should not exceed 25 per cent of the state disaster relief fund’s allocation for the year and expenditure on equipment for laboratories and equipment should not exceed 10 per cent of the total allocation.

“The idea is to empower states to manage Covid,” a government statement said after Cabinet Secretary Rajeev Gauba held another review meeting with the states’ officers today asking them to step up efforts.

The Centre has ordered a slew of measures for containment of Covid, including travel restrictions, universal screening of passengers at airports and seaports, suspension of visas and self-quarantine measures, declaration of masks and hand sanitisers as essential commodities to enable states to proceed against black marketers, enhancing the number of testing labs to 52 and issuing guidelines for states on home quarantine and also on screening and contact tracing.

In his video-conference with Chief Secretaries, Gauba emphasised on strengthening preventive and control measures with adequate number of isolation wards, quarantine facilities and ensuring that arrivals from the identified countries were quarantined as per the guidelines.

Of 15, only 6 sC Benches to hear urgent cases

As the SC reopens on Monday after the Holi break, there will be no Constitution Bench or Special Bench, and instead of 15, only six Benches will assemble to take up urgent matters. The six Benches of the SC will on March 16 take up only 12 urgent matters each.

The annual meet of the Akhil Bharatiya Pratinidhi Sabha, the highest decision-making body of the RSS, scheduled to start from Sunday in Bengaluru has been cancelled in view of the Covid scare. At least 1,500 members were expected to attend the meeting.

The IAF has launched a 24x7 corona helpline — 9731931437 — for personnel & families of all three services to dispel misconceptions on social media.

The HP Government has announced closure of all government as well as private schools, colleges and universities till March 31.

An Indian national in Rwanda has tested positive for Covid, the first confirmed case in the east African country. The Indian citizen had arrived from Mumbai on March 8.

Rajasthan has reported its fourth case of Covid with a 24-year-old Jaipur man testing positive. The patient had flown from Madrid to Delhi and then to Jaipur by Air India flight 491 on March 14.