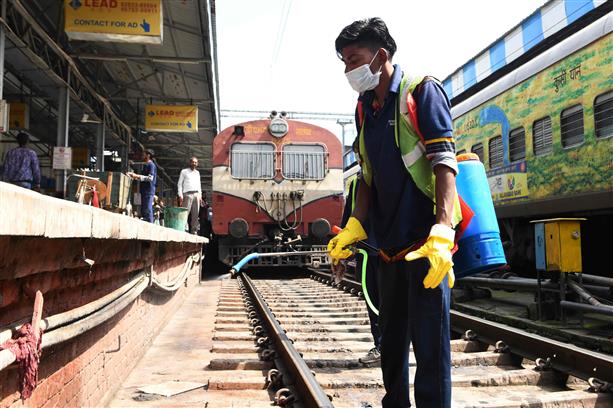 A railway worker sprays disinfectant on train tracks as a preventive measure against the spread of the COVID-19 coronavirus at a railway station in Amritsar on March 16, 2020. AFP photo

The Indian Railways on Wednesday cancelled 64 more trains as a precautionary measure to contain the spread of coronavirus, taking the total number of trains cancelled to 149.

The Northern Railways cancelled 18 trains on Wednesday, a day after it cancelled five trains on Tuesday amid the Covid-19 pandemic outbreak, which has affected 151 people across the country.

Northern Railway spokesperson Deepak Kumar said: "Eighteen trains have been cancelled due to low occupancy and operational reasons." He said the decision was taken in order to regulate unnecessary crowding at stations, as a temporary measure.

The spokesperson also said the Railway Board has directed all Divisional Railway Managers to raise platform ticket prices to Rs 50 at important stations that deal with large rush of passengers or visitors, as in March 2015, the railways had delegated them powers to increase their rates to regulate rush during specific requirements under intimation of its office.

The railways even increased the prices of the platform tickets at over 300 stations from Rs 10 to Rs 50 to stop crowding at the railway stations.

With 25 new cases of coronavirus infections reported on Wednesday, the number of COVID-19 patients in India climbed to 151, up from 126 a day earlier, the Health Ministry said. ---- IANS