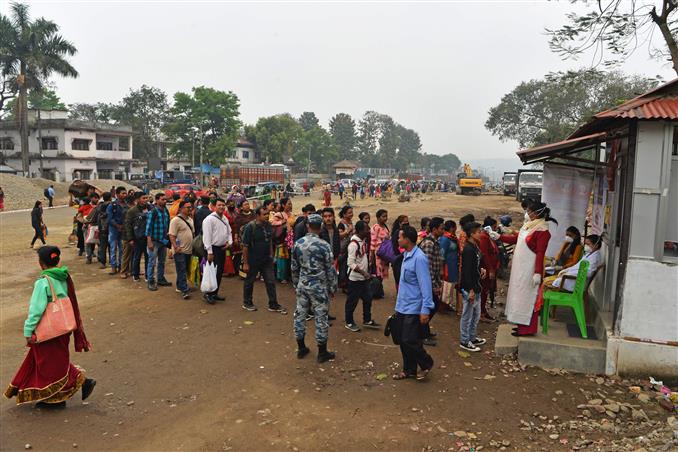 A member of medical staff wearing a facemask amid concerns over the spread of the COVID-19 novel coronavirus, checks the body temperature of travellers arriving from India at the eastern border with Nepal in Kakarvitta, southeast of Nepal on March 14, 2020.-AFP

India suspended on Saturday movements of all types of passengers through the international border points with Pakistan from March 16 midnight in wake of the threat from the novel coronavirus pandemic, officials said.

The Union Home Ministry also announced that all types of passenger movement would be suspended from March 15 midnight through the Indo-Bangladesh, Indo-Nepal, Indo-Bhutan and Indo-Myanmar borders, barring a few specified border checkposts.

"All types of passenger movements through all the immigration land check posts located India-Bangladesh, India-Nepal, India-Bhutan and India-Myanmar borders will be suspended with effect from 00:00 hours on March 15, except through a few posts, and at India-Pakistan border with effect from 00:00 hours on March 16 until further orders," according to a Home Ministry order.

The decisions have been taken in view of the COVID19 threat, an official said.

There will be intensified health inspections at the entry points, which will be allowed along the borders with Bangladesh, Nepal, Bhutan and Myanmar, according to the order.

Diplomats and UN personnel having valid visas may be allowed through the Attari crossing point along the India-Pakistan border. However, they would be subjected to health screening and, if required, they may be subjected to quarantine, the order stated.

The operation of existing India-Bangladesh cross-border passengers trains and buses will remain suspended till April 15, it added. PTI