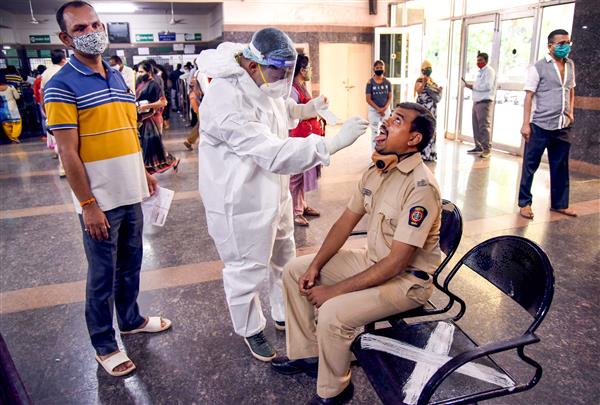 India has registered a record in the number of COVID-19 cumulative tests, with over 21.15 crore samples tested, the Union Health Ministry said on Monday.

The country’s national positivity rate is pegged at 5.20 per cent.

Progressive countrywide expansion in testing infrastructure has played a crucial role in the steep rise of testing numbers, the ministry underlined.

With 2,393 testing labs in the country including 1,220 government laboratories and 1,173 private laboratories, the daily testing capacity has got a substantial boost.

“The number of beneficiaries being tested per million every day has shown a consistent and progressive increase. India’s tests per million stand at 1,53,298.4 as on date,” the ministry highlighted.

A total of 9,695 patients have recovered and got discharged in a span of 24 hours.

The ministry said 80.86 per cent of the new recovered cases are observed to be concentrated in five states.

Kerala has reported the maximum number of single day recoveries with 4,345 newly recovered cases. A total of 2,417 people recovered in Maharashtra in a span of 24 hours followed by 460 in Tamil Nadu.

The country’s total active cases is 1,50,055 as on date which consists of 1.36 per cent of India’s total infections.

Seven states and UTs have not reported any new cases in a span of 24 hours. These are Uttarakhand, Ladakh, Meghalaya, Mizoram, Arunachal Pradesh, Daman and Diu and Dadar and Nagar Haveli, Andaman and Nicobar Islands, the ministry said.

It said 86.3 per cent of the new cases are from five states.

Maharashtra continues to report the highest daily new cases at 6,971. It is followed by Kerala with 4,070 while Tamil Nadu reported 452 new cases.

Besides, 83 deaths were reported in a span of 24 hours, the ministry said adding five states account for 78.31 per cent of the new deaths. Maharashtra saw the maximum casualties (35). Kerala reported 15 deaths. — PTI