COVID-19 surge: Bihar imposes night curfew from 9 pm to 5 am

Religious places of all faiths will remain shut till May 15 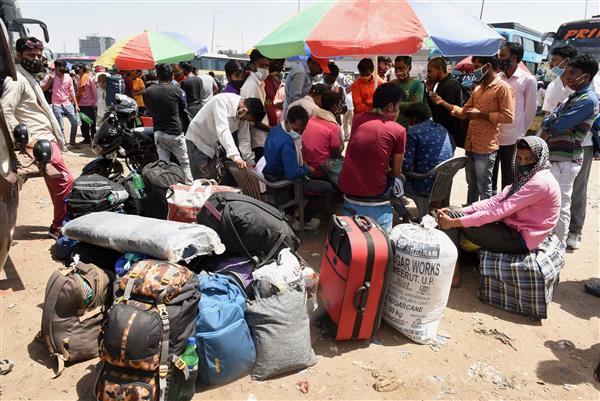 Migrant workers wait to board interstate buses for Uttar Pradesh, Jharkhand, Chhattisgarh, Madhya Pradesh, and Bihar, as cases of COVID-19 rise in the NCR region, in Gurugram. PTI

The Bihar government on Sunday decided to impose night curfew from 9 pm to 5 am as part of new measures to check spread of the killer virus, Chief Minister Nitish Kumar announced here.

A decision has also been taken to extend closure of schools/colleges/coaching centres till May 15 from April 30 decided earlier, he told reporters.

Religious places of all faiths will remain shut till May 15 in view of the sudden spike in coronavirus cases in Bihar, the chief minister said.

Earlier, they were closed till April 30.

The government offices with one-third strength will function only till 5 pm while shops/mandis/business establishments will be closed at 6 pm, an hour earlier than what was decided last week, he said.

Attendance in funeral was reduced to 25 from 50 earlier and likewise gathering in marriage/shradha was curtailed to 100 from 200 earlier.

Kumar announced the new curbs to break the chain of coronavirus in Bihar after an all-party meeting Saturday followed by an interaction with the district officials during the day. PTI

18 hours ago
6
Chandigarh In Brief