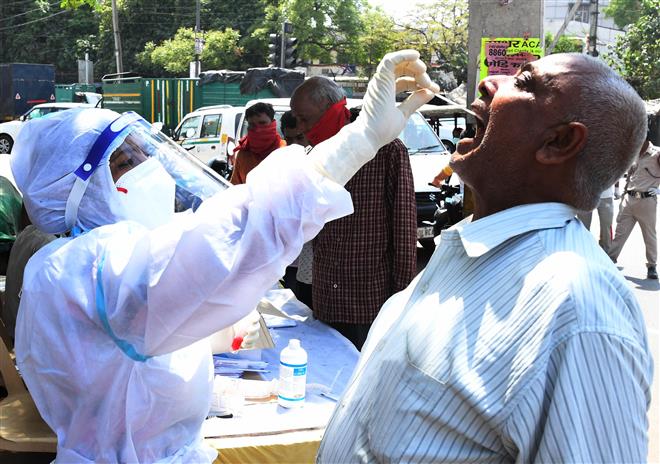 A health worker wearing PPE collects a swab sample from a man for COVID-19 RT-PCR test at the road side in New Delhi on Tuesday. Tribune photo: Mukesh Aggarwal

Both Covishield and Covaxin vaccines are effective against the UK and the Brazilian variants of coronavirus, while the work against the South African strain was on at several laboratories, the Centre said on Tuesday.

Addressing a weekly press conference of the Union Health Ministry, ICMR Director-General Balram Bhargava also said of 11,064 genome samples sequenced in the country, the UK variant of the virus was detected in 807, the South African variant in 47 and the Brazilian variant was found in one.

“Both the vaccines—Covishield and Covaxin—are effective against the UK and the Brazilian variants and the work against the South African variant is ongoing at several laboratories,” he said.

“In terms of significance of the point of double mutations they are not significant as far as India is concerned and their relationship with increased severity or increased transmissibility has not been established in Indian context,” he said.

Responding to another question, Union Health Secretary Rajesh Bhushan said there is no Indian strain of coronavirus.

Noting that there are two concepts—concept of virus shift and virus drift, Bhushan said all viruses drift as the virus replicates itself but the changes that occur due to this process are not important and it does not call for any rapid change in the public response strategy.

He also said it was “natural and inevitable phenomenon” that a virus that has been around for more than a year, travelled through more than one crore people, will obviously undergo change. This is not a cause to panic, he added.

“However, when a virus shifts it undergoes significant changes and there is a need to test whether my existing vaccines work against the virus, known as variant or mutant virus,” he explained.

Last week, the Union Health Ministry said the new “double mutant” variant of SARS-CoV-2 was detected in Delhi, Maharashtra and some other places in addition to the three “variants of concern”—first noticed in the UK, South Africa and Brazil—that have been found in at least 18 states and union territories. PTI