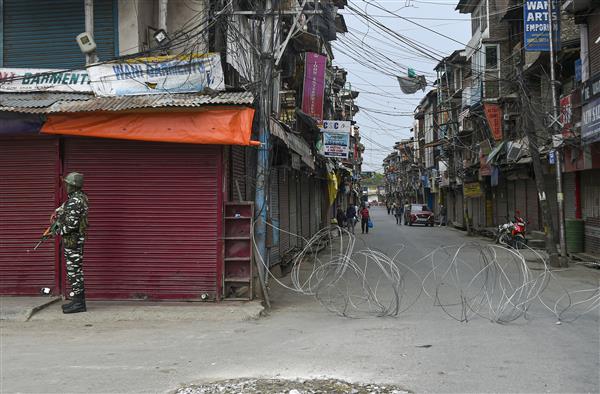 A CRPF personnel stands guard during lockdown imposed in Jammu and Kashmir by administration to contain the surge in COVID-19 cases in Srinagar on May 6, 2021. PTI file photo

The Central Reserve Police Force (CRPF) has lost 108 personnel to COVID-19, the highest among the central forces that function under the command of the Union home ministry, according to data updated on Monday.

A total of 271 personnel of the seven forces of CRPF, BSF, CISF, ITBP, SSB, NSG and NDRF have succumbed to the pandemic so far.

These forces – deployed for rendering a variety of security, border guarding, relief and rescue duties across the country – also reported 763 fresh coronavirus infections in a day, taking the tally of cases in their ranks to 71,295.

The number of active cases in these seven forces stands at 9,464 while 61,560 personnel have recovered till now.

The nearly 3.25-lakh personnel strong CRPF has recorded the maximum number of COVID-19 cases at over 20,700 while 108 of its staffers have succumbed to the disease.

The force is the mainstay for anti-Naxal operations and counter-terrorist combat in the Kashmir valley.

The CRPF is followed by the nearly 2.5-lakh personnel strong Border Security Force (BSF), primarily mandated to guard Indian fronts with Pakistan and Bangladesh, with over 19,800 infections and 66 deaths.

The Central Industrial Security Force (CISF), tasked with guarding vital installations and major civil airports of the country, has reported over 16,100 infections and 61 deaths, according to the data accessed by PTI.

The Sashastra Seema Bal (SSB) and the Indo-Tibetan Border Police (ITBP), which have a total strength of just about a lakh, have lost 17 and 14 personnel to the pandemic respectively.

While the SSB mans Indian fronts with Nepal and Bhutan, the ITBP is deployed to guard the Line of Actual Control with China.

The National Disaster Response Force (NDRF) has lost four personnel to coronavirus and the National Security Guard (NSG) has lost one.

“Very soon 100 per cent vaccination target will be achieved in ITBP,” he said. — PTI