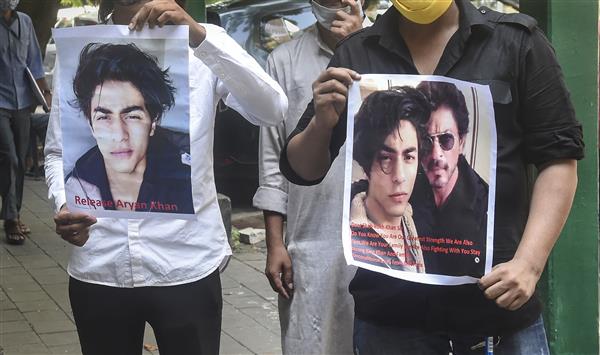 The Narcotics Control Bureau spoke about Aryan Khan, Bollywood actor Shah Rukh Khan’s son, and others of being accused of a conspiracy, but it never pressed that charge officially following their arrest in a drugs case, their lawyer told the Bombay High Court during bail hearing on Wednesday.

The hearing on bail applications of Aryan Khan, Arbaaz Merchant and Munmun Dhamecha before Justice NW Sambre remained incomplete on the second day.

Khan (23) and other two are in jail since October 3 after the NCB raided a cruise ship off the Mumbai coast and allegedly recovered narcotic drugs.

“Tomorrow we will try to finish it,” Justice Sambre said after Wednesday’s hearing which went on for over two hours.

Senior advocate Mukul  Rohatgi, appearing for Aryan Khan, argued that the arrest was a direct infringement of constitutional provisions as the arrest memo did not give the “true and correct grounds”.

Senior counsel Amit Desai, appearing for Merchant, pointed out that the special court for Narcotic Drugs and Psychotropic Substances (NDPS) Act on Tuesday granted bail to two other accused in the case—Manish Rajgaria and Avin Sahu.

“The allegations against them are also the same. In fact there was recovery of 2.6 grams of ganja (cannabis) from one of the accused and the second had said that he had consumed,” Desai said.

“If not on (the ground of) parity but on liberty these boys (Aryan Khan and Merchant) should be granted bail...Release them on bail with strict conditions,” Desai argued.

He further told the court that the charge of conspiracy and abetment was invoked in the case by the NCB as an afterthought.

Instead of arresting them, the NCB should have first issued them a notice under section 41A of the Code of Criminal Procedure (under which an accused is asked to appear and record a statement in minor offenses), the lawyer said.

“What was the need to arrest them at that time when conspiracy charge was not even applied,” Desai said, adding that the charge of possession of small quantity of drugs only attracts one year’s imprisonment, so it was a minor offense.

The NCB’s arrest memo of October 3 contained only sections 20(B) and 27 of the NDPS Act which relate to consumption and possession of drugs, and   “there is no mention of sections 28 and 29 pertaining to abetment and conspiracy,” advocate Desai said.

“So as per the NCB’s assessment of material based on recovery at that time...these three individuals were doing individual acts of consumption and possession,” Desai said, claiming further that to date the charge of conspiracy has not been officially invoked against the trio.

“The magistrate on October 3 was misled by the NCB to believe that conspiracy charge was also invoked while seeking their remand,” he said.

Merchant’s alleged statement that he had on him six grams of charas for consumption along with Aryan was inadmissible as evidence, and the NCB never sent them for medical examination, the lawyer said.

The high court asked if there was any connection between the two co-accused who have got bail, and Aryan Khan and Merchant. Desai said there was absolutely no connection.

“There are no WhatsApp chats between these three accused with the other accused. The WhatsApp chats being relied upon by the NCB are old and have no connection with this case,” the lawyer added.

These alleged WhatsApp chats of Aryan and others were provided to the media but were not part of court records, he said, questioning their veracity.

Justice Sambre said the United Kingdom has done away with the need to supply a certificate to prove the authenticity of electronic evidence, but the same is needed in India.

Advocate Kaashif Ali Khan Deshmukh,  appearing for Dhamecha, said she was made a scapegoat only because she was detained with Aryan and Merchant.

“The NCB has made Dhamecha a part of the alleged drug network. She doesn’t even know these persons (Aryan and Merchant). She comes from a small town in Madhya Pradesh and is a fashion model,” he said.

Dhamecha never consumed drugs and a medical examination can confirm it, her lawyer added.