Curtains come down on UP’s 7-phase elections : The Tribune India 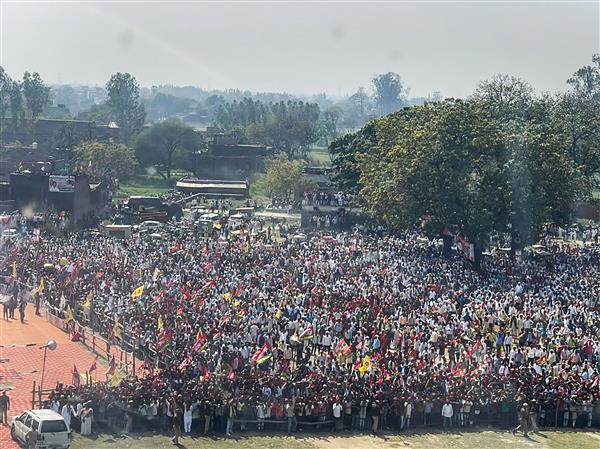 Supporters attend an election campaign rally of Samajwadi Party President Akhilesh Yadav (unseen) for the seventh and last phase of UP Assembly elections in Azamgarh on Saturday. PTI photo

Speaking in the Khajuri village in Varanasi, Prime Minister Modi described these elections as “pro-incumbency”, asserting that “people themselves are fighting for the continuation of the BJP government”.

Slamming rivals for their “blind and continuous attack, acute frustration and negativity towards the BJP”, Modi said that due to their aversion towards him, “dynasts were making fun of ‘vocal for local’ and the Swachh Bharat Abhiyan”. Even on the Ukraine issue, the Opposition is busy doing politics, adding to the people’s woes”, he said.

‘Land of my forefathers’

Describing UP as the land of her forefathers, Priyanka Gandhi vowed not to leave the state irrespective of results. Accusing rivals, specifically the BJP, of “practising politics of caste and religion” and “pursuing hollow nationalism”, Gandhi said she would continue to fight for the people of Uttar Pradesh till the emergence of a true and correct change in its politics.

Speaking in Ghazipur, she said: “You (public) are being misled through the issue of caste and religion. You stand to lose the most and politicians, hardly anything. They just want to come back to power by keeping the people poor”.

Akhilesh Yadav, in Azamgarh, claimed that people will send the BJP “saat samundar paar” in the seventh phase. “When our government will come, along with police recruitments we will also ensure that recruitments for the Army are done,” he said. The phase will seal the fate of several political heavyweights, including state minister Neelkanth Tiwari who is facing massive anti-incumbency in Varanasi South, SBSP chief Om Prakash Rajbhar and gangster Mukhtar Ansari’s son Abbas Ansari who is contesting on his father’s traditional seat on an SBSP ticket from Mau Sadar in Ghazipur district.

In 2017, Abbas contested on a BSP ticket from Ghosi but lost to BJP’s Fagu Chauhan. Apparently, Rajbhar wanted Mukhtar Ansari to contest from the seat but Akhilesh Yadav put his foot down in mind the BJP.

BJP’s former ally Rajbhar is against BJP’s Kalicharan Rajbhar in Zahoorabad in Ghazipur district. In 2017, he won the seat on a BJP ticket. However, the biggest challenge in these elections is the one faced by Tourism, Culture, and Religious Affairs Minister Neelkanth Tiwari, who also had to issue a public apology. “I’m human and I do make mistakes. Please forgive me for the intentional or unintentional mistakes I may have made over the last five years,” he said. Incidentally, the Samajwadi Party has pitched Mahamritunjay Mandir priest Mahant Pujari Kishan Dixit against him in the constituency which also has around one lakh Muslim voters, its core vote base.

The Rohania seat in Varanasi district is a fight between two Apna Dals, one led by BJP ally Anupriya Pate and the other by her mother Krishna Patel who is backing the SP. In fact of eight districts of Varanasi, three—Sewapuri, Rohania, and Pindara— have a large number of Patel voters.