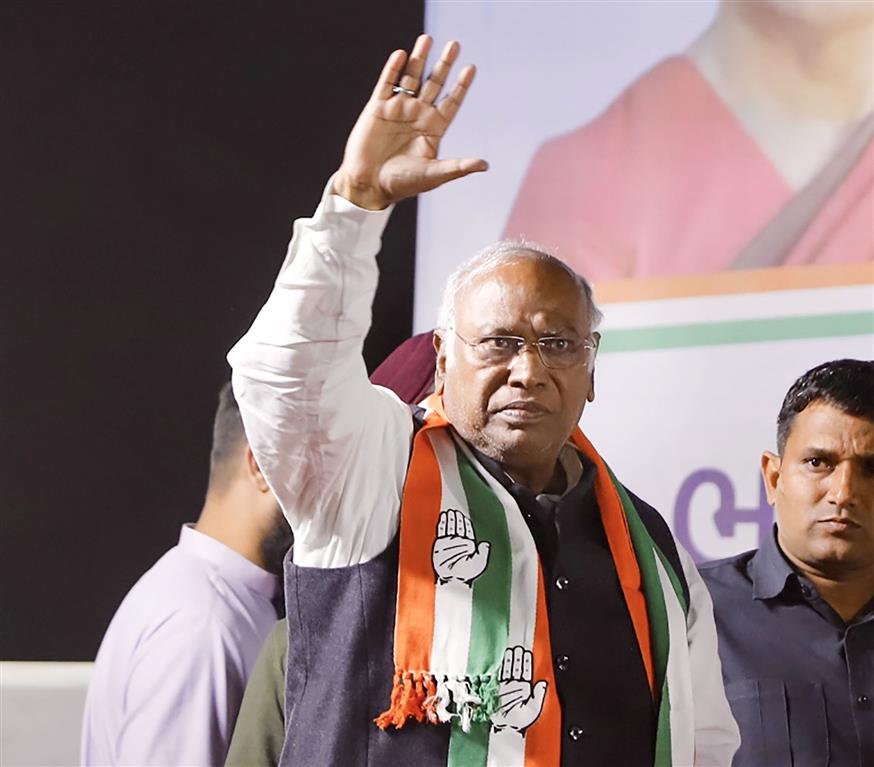 Cong president Mallikarjun Kharge waves at supporters during a public meeting in Ahmedabad on Tuesday. PTI

Campaigning for the first phase of the Gujarat Assembly elections to be held on December 1 ended on Tuesday. As many as 788 candidates are in the fray for 89 seats across 19 districts of south Gujarat and Kutch-Saurashtra regions where voting will be held on Thursday.

New entrant AAP is set to queer the pitch in a traditionally BJP-Congress fight. It has fielded candidates on 181 of the state's 182 seats with journalist Isudan Gadhvi leading the party as the CM face. He is contesting from Khambhalia in Devbhumi Dwarka district.

On the concluding day, BJP stalwarts JP Nadda, Amit Shah, Yogi Adityanath and Pramod Sawant made last-ditch efforts to woo voters. The highlight of the day was the slugfest between the two main parties over Congress chief Mallikarjun Kharge’s “Ravana” barb at PM Narendra Modi. The BJP slammed it as an “insult” on every Gujarati, while the Congress called the attack on its leader “anti-Dalit tirade”.

Gujarat CM Bhupendra Patel said, “Bereft of any agenda and support from the people, the Congress is out to abuse Gujarat. The remark is a testimony to their hate for Gujaratis, who will reject them this time too for such behaviour.”

BJP spokesperson Sambit Patra appealed to the people for 100 per cent voting for the “son of the soil to avenge the insult”.