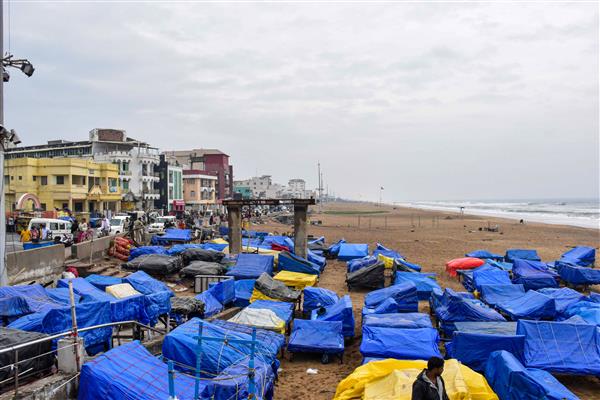 Beach-side shops covered by polythene sheets in the wake of Cyclone Jawad in Puri on Saturday. PTI photo

The governments of Andhra and Odisha breathed easy after Cyclone Jawad weakened significantly on Saturday, even though heavy rain pelted both states as well as West Bengal.

The cyclonic storm weakened into a deep depression and lay centered over west-central Bay of Bengal, about 180 km east-southeast of Visakhapatnam, Andhra Pradesh, and 330 km south-southwest of Puri, Odisha at 5:30 pm, the Met office said in a statement.

Saudi Arabia has given the cyclone its name 'Jawad' -- the liberal or merciful.

A low-pressure area had developed over the Andaman Sea on November 30.

Sea conditions will remain unsafe for shipping and fishermen in the central and north Bay of Bengal till Sunday.

The news that the cyclonic storm ‘Jawad’ had weakened significantly came as a relief for Odisha, a state already battered by two cyclones—‘Gulab’ and ‘Yaas’—in the last year.

The entire coastal region of Odisha has been experiencing rainfall since Friday night. Paradip recorded the maximum downpour at 68 mm followed by Bhubaneswar (10.4) mm in the last 12 hours, the met office said.

However, there will be no blanket evacuation as the expected wind speed is low in comparison to other cyclones, he said.

Jena said nearly 22,700 fishing boats have already returned from the sea and the Chilika lake.

“We have also asked the district collectors to shelter fishing boats from Andhra Pradesh and West Bengal, which are unable to return to their destination within the stipulated time,” the SRC said, adding, fishermen have been advised not to venture into the sea till December 5.

Andhra Pradesh's government said a teenager was killed as heavy rain lashed Andhra’s Srikakulam district on Saturday. Over 60 relief centres have been opened to lodge people from vulnerable areas, the state government said.

Though the weather remained overcast, Vizianagaram and Visakhapatnam districts did not experience much rain, data provided by the state government said.

Srikakulam district, however, received a downpour of over 11 cm, with the Tekkali revenue division recording the maximum of up to 5.7 cm at isolated places.

In Vajrapukothuru mandal, heavy winds uprooted a coconut tree that fell on a teenager Gorakala Indu (16), killing him instantly.

State Fisheries Minister Sidiri Appala Raju, who hails from the district, visited the victim's family in the Palasa hospital and promised all help.

District Collector L Srikesh Balaji visited Santabommali mandal and inspected the relief camps and the food being provided to the accommodated persons.

He asked them to be cautious and stay indoors till the storm subsided.

The South Central Railway cancelled more than 60 Express trains on the east coast route on Saturday and Sunday in view of the cyclonic storm.

The West Bengal government evacuated thousands of people in South 24 Parganas and Purba Medinipur districts and urged tourists in popular sea resorts to stay away from beaches.

The administration in South 24 Parganas and Purba Medinipur districts evacuated around 11,000 people from the coastal areas to safer locations, while boats with fishermen returned in Kakdwip, Digha, Shankarpur and other coastal belts, an official said.

“The system is likely to move north-northwestwards and reach west-central Bay of Bengal and thereafter is likely to recurve north-northeastwards, move along Odisha coast reaching near Puri around December 5 noon, and weaken gradually,” a met office spokesman said.

Rescue teams were seen asking scattered groups of tourists and locals to vacate beaches in Digha, Shankarpur, Tajpur and Bakkhali. A total of 19 teams of the National Disaster Response Force have been deployed in the state in the wake of the cyclone.

The met office has forecast heavy to very heavy rainfall at one or two places in Kolkata, Purba and Paschim Medinipur, North and South 24 Parganas, Jhargram, Hooghly and Howrah districts.

Heavy rain is also likely to occur on Monday in the districts of North and South 24 Parganas, Nadia and Murshidabad, it said.