Will gradually become a ‘deep depression’ as it moves northwards; 3 die in Mumbai 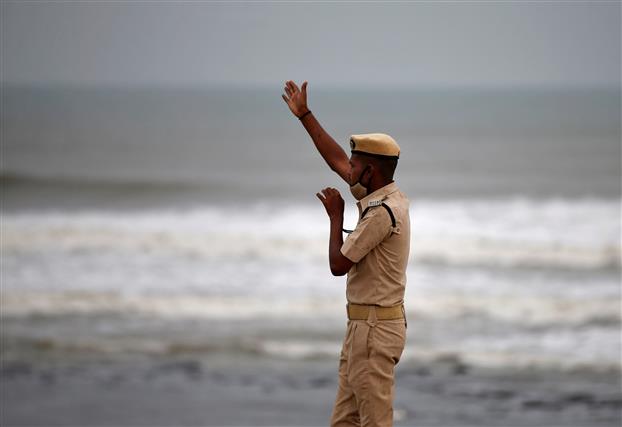 A policeman directs people to leave as waves approach the shore ahead of Cyclone Tauktae in Veraval in the western state of Gujarat on May 17. Reuters

At least seven people were killed in Gujarat as cyclone Tauktae battered parts of the state and left behind a trail of destruction along the coast, uprooting electric poles and trees, and damaging several houses and roads, before weakening, officials said on Tuesday.

Tauktae has now weakened into a “cyclonic storm” and will gradually become a “deep depression” as it moves northwards, the India Meteorological Department (IMD) said.

The cyclonic storm dumped heavy showers in parts of the state, with as many as 35 talukas receiving over one inch of rainfall.

Heavy showers left many areas of Ahmedabad city inundated with knee-deep water during the day.

Over 16,000 houses were damaged, and more than 40,000 trees and over 1,000 poles uprooted due to the cyclonic storm in Gujarat, Chief Minister Vijay Rupani said.

The Indian Coast Guard on Tuesday rescued eight fishermen onboard a fishing boat that drifted into the sea off the coast of Veraval harbour due to the cyclone, officials said.

The landfall process of the eye of the extremely severe cyclonic storm Tauktae, which had hit the Gujarat coast in the Saurashtra region between Diu and Una last night, ended around midnight, the India Meteorological Department (IMD) said.

Many areas of Ahmedabad city were inundated with knee-deep water following incessant downpour since afternoon as cyclone Tauktae passed northward along the district’s periphery.

The city received a staggering 75.69 mm of rain between 6 am and 4 pm, said Municipal Commissioner Mukesh  Kumar.

As it moved north-northeastward, it is gradually going to weaken into a “deep depression”, it added.

The remnant of the system is very likely to move north-eastwards across Rajasthan to west Uttar Pradesh during May 19 and 20, the Home Ministry said in an advisory.

As of late Tuesday afternoon, the cyclonic storm lay centred over Saurashtra, around 75 km south-southwest of Ahmedabad and 40 km west of Surendranagar, and 190 km of Deesa, with the wind intensity now reduced to 70-80 kmph gusting to 90 kmph, the IMD said.

Even as the cyclonic intensity weakened, it has left behind a trail of destruction, with at least seven people losing their lives - three in Bhavnagar, and one each in Rajkot, Patan, Amreli and Valsad, officials said.

An official of the State Emergency Operation Centre (SEOC) confirmed three casualties due to the cyclone, one each from Rajkot, Valsad and Bhavnagar.

In Patan, an electric pole fell on a woman while she was sleeping on late Monday night amid strong wind, an official from Patan A-division police station said.

In Badeli village in Palitana taluka of Bhavnagar district, a woman and her daughter were killed when the wall of their house collapsed, a local official said.

In another incident, a girl died after the roof of her house collapsed on four members of the family at Rajula in Amreli district on Monday night, police said.

The chief minister told reporters in Gandhinagar that 16,500 houses, mostly thatched ones, were damaged, and more than 40,000 trees and 1,081 poles, mainly of electric supply, were uprooted due to the cyclone.

Also, 159 roads were damaged and 196 remained blocked due to different reasons, he said, adding that 45 of the roads were cleared for traffic so far.

There was a power outage in 2,437 villages and the supply has been restored in 484 villages till now, the CM said.

Rupani said the state government’s major concern was to ensure the uninterrupted treatment to COVID-19 patients in around 1,400 hospitals across the state.

Out of these facilities, 16 faced power outage due to the cyclone.

The electric supply was restored in 12 of them, while the remaining four were operating on backup power generators, he said.

The production of medical oxygen at a plant in Bhavnagar was disrupted due to the cyclonic storm, but the supply continued using the buffer stock, Rupani said.

The landfall process started with the entry of the “forward sector of the eye of the cyclone” into the land near the Union Territory of Diu with a wind speed of between 150 and 175 km per hour, IMD officials said.

Three died and ten were wounded in Mumbai. The sea here has been very rough due to the impact of the cyclone and the huge tidal waves on Monday dumped tonnes of garbage at chowpatties, Marine Drive and the iconic Gateway of India in Mumbai, officials said said.

Videos of huge tidal waves lashing the Gateway of Mumbai area went viral on social media platforms where people also shared images of the trail of destruction left by the cyclonic storm at some of the prominent monuments here.

Mumbai Mayor Kishori Pednekar said due to the precautions taken by the city civic body, the jumbo COVID-19 facility set up at the Bandra-Kurla Complex did not suffer many major damage, except that its cover was torn at some places and some iron sheets were blown away.

The cyclonic storm claimed two lives in separate boat accidents at Mahim and Madh jetties here, as per an update issued by the Brihanmumbai Municipal Corporation (BMC).

In another incident, a tree collapsed on a 45-year-old woman at a chawl in Worli area on Monday. She succumbed to her injuries while undergoing treatment at the KEM Hospital, the BMC said.

Besides, nine people were injured in incidents of house and wall collapse, while one person got hurt in a tree fall, it said.

According to BMC, it received 2,364 complaints of tree fall, 56 related to water-logging, 43 of house or wall collapse, 39 of short-circuit and two of boat accidents over the last 24 hours.

It said that the India Meteorological Department’s (IMD) Mumbai centre recorded 207.6 mm rainfall at Colaba in south Mumbai and 230.3 mm at Santacruz in suburbs in the 24- hour period ending at 8.30 am on Tuesday.

The Bandra-Worli sea-link, which was shut on Monday, was opened for traffic around 12.30 pm on Tuesday, it added.