Each NDRF team has 47 personnel who are equipped with tree and pole cutters, communication gadgets, inflatable boats and basic medical aid 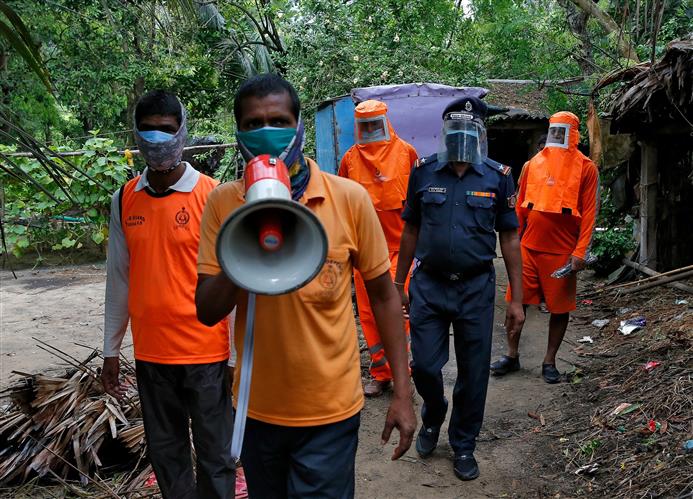 A member of the NDRF uses a megaphone to appeal to residents to move to safer place ahead of Cyclone Yaas at Digha in Purba Medinipur district in West Bengal. Reuters

The National Disaster Response Force (NDRF) on Tuesday informed that it has mandated deployment of the highest number of its 112 teams in Odisha and West Bengal as part of relief and rescue preparations in view of the impending severe cyclone Yaas.

These teams of NDRF personnel are being deployed in five states and the Union Territory of Andaman and Nicobar Islands, which are expected to be affected by the cyclone developing in the Bay of Bengal.

“Out of these, the highest number of 52 teams are designated for Odisha followed by 45 teams for West Bengal,” said a senior official of the central contingency force, adding that the rest of the teams are being stationed in states like Andhra Pradesh, Tamil Nadu, Jharkhand and the UT of Andaman and Nicobar Islands.

In one of his Twitter posts, NDRF Director General SN Pradhan said that this was the “highest ever” commitment of its teams in the two states of Odisha and West Bengal.

Another official in the force said that the number of NDRF teams earmarked for these two states during past cyclones had never been this high. Teams in these two states can also be enhanced if the states require or situation demands, he added.

Cyclonic storm Yaas is likely to make a landfall near Balasore in north Odisha sometime around Wednesday noon. It can possess a speed of 155 kmph-165 kmph, gusting to 185 kmph, the Met department had said on Monday.

Each NDRF team has 47 personnel who are equipped with tree and pole cutters, communication gadgets, inflatable boats and basic medical aid.

These teams, along with various disaster combat and mitigation units, are presently carrying out evacuation and awareness drives in the affected areas so that no lives are lost, the senior officer said.