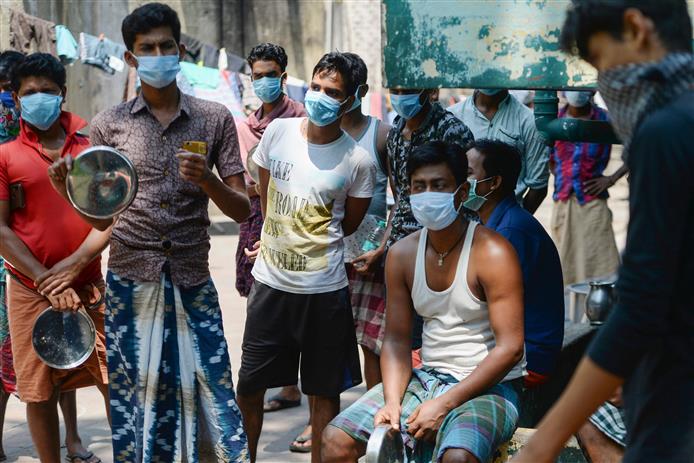 Migrant workers wait to get food at a camp during a government-imposed nationwide lockdown as a preventive measure against the spread of the COVID-19 coronavirus in Chennai on April 16, 2020. AFP

As the country is gearing towards phased return to life in post lockdown phase, several experts, including industrialists, on Thursday felt the Centre should consider supporting people, enterprises, build logistics and curtail revenue spending as measures to revive economy.

Urging the government to be more open in supporting low-wage/daily wage earners, the worst hit in these times of lockdown, former CII president Naushad Forbes said putting money in the Jan Dhan accounts, increase in working capital limits for enterprises, additional working capital through loans at 4 to 5 per cent interest backed by government guarantee to take care of next three months of salaries and wage freeze if not say a 10 per cent cuts at the top end.

Taking part in a webinar ‘On the road to recovery: Indian economy in post lockdown’ organised by think tank Ananta Aspen Centre, Dr Forbes who also co-chairs his enterprise said his company was taking care of not just its employees but also the chain of service providers, including conservation staff. As for opportunity, he said, India could work on plans not only to reach out to others but also look for new places through enterprise.

Advocating that India could consider limits on expenditure on the revenue side without slashing the capital expenditure, veteran columnist A K Bhattacharya said the working class would be hit the most and poor health on account of malnourishment during these difficult times would add to the problem of having a weak work force.

Another lesson from this pandemic is that India suffered from concurrent planning and the policy planners should have come up with economic package quicker. He also visualised that post-lockdown many new business models would emerge especially with change of methods like work from home ad use of digital technology could give localisation a larger role to play.

Taking part in the webinar, medical professional Arvind Kumar, Chairman for Chest Surgery and Lung Transplantation, Sir Ganga Ram Hospital, said the strategy to go for lockdown as to build up health infrastructure and train health professionals to cope up with the load of cases without which the sector would be unable to handle the pressure.

With increased awareness and changing situation, the advisories to were altered to keep pace with the spread of the disease. The testing strategy itself was adapting to the situation and containment at hotspots.

As for the another health problem that may emerge due to less treatment for those with life threatening diseases, he said, these could be described as collateral damage but the flip side was that there is a sharp decline in loss of lives in accidents reported in normal time.