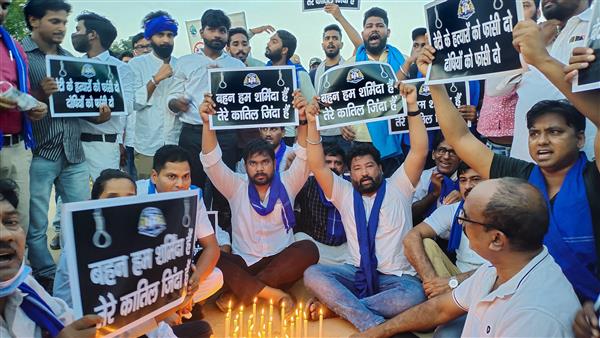 Bhim Army activists during a candle march after a minor girl was allegedly raped and murdered, near India Gate in New Delhi on Wednesday. PTI photo

The Delhi Police on Wednesday transferred a case of alleged rape and murder of a nine-year-old girl in the Old Nangal area here to the Crime Branch, officials said.

Delhi Police PRO Chinmoy Biswal said the case was transferred to the Crime Branch for an expeditious and scientific investigation.

The girl died under suspicious circumstances even as her parents alleged that she was raped and forcibly cremated by a crematorium priest in southwest Delhi’s Old Nangal village.

Police had said based on the statement of the victim’s mother, the charge of rape was added in the FIR. Four people, including the priest, have been arrested.

Only the burnt legs of the girl were recovered from the crematorium.

Since Monday, the agitated locals had blocked a stretch of road in the area demanding justice for the girl, who was allegedly raped and killed on Sunday.

The parents of the girl, along with several others, staged a sit-in near the site of the alleged crime on Tuesday and demanded capital punishment for the culprits.

Around 6 pm, the crematorium’s priest, Radhey Shyam, and two-three others called the girl’s mother to the spot. Showing the girl’s body to her mother, they claimed that she got electrocuted while getting water from the cooler.

There were burn marks between her left wrist and elbow, and her lips were also blue.

The priest and the others dissuaded her mother from making a PCR call, saying police will make a case out of it, and during post-mortem, doctors will steal the girl’s organs, so it was better to cremate her.

The girl was cremated but subsequently, her parents alleged that it was done without their consent. A crowd of around 200 villagers gathered at the crematorium and the police were informed. — PTI