Day 3 of Kerala leg of Bharat Jodo Yatra commences amidst encouraging turn out : The Tribune India

The foot march is set to cover 3,570 km from Kanyakumari to Kashmir over a 150-day period 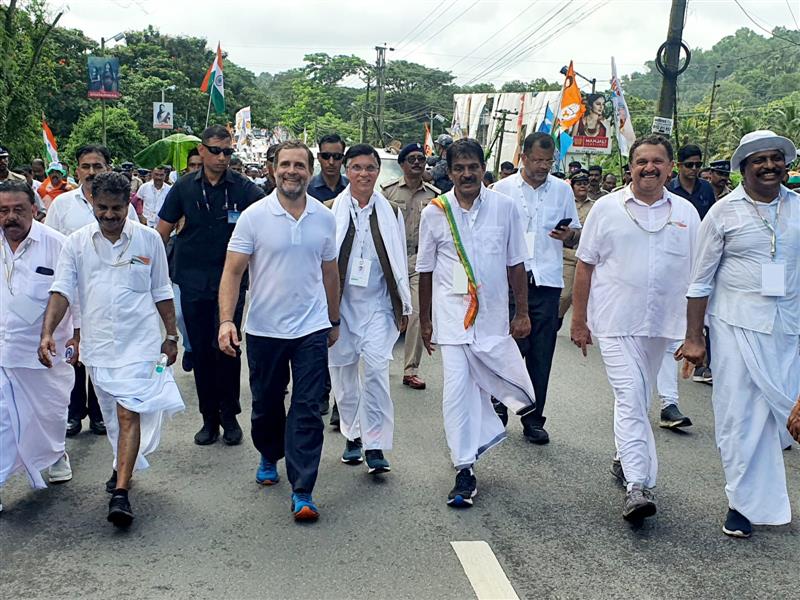 The third day of the Kerala leg of Congress' Bharat Jodo Yatra commenced on Tuesday from Kaniyapuram near Kazhakootam here where the yatra ended on the previous day.

The third day of the yatra, which commenced around 7.15 am, also saw an encouraging turnout of people like the previous two days of the Kerala leg of the foot march which is set to cover 3,570 km from Kanyakumari to Kashmir over a 150-day period.

When the yatra ended on Monday evening, it had covered 100 km.

Addressing a large crowd at Kazhakootam, where the yatra had ended for the day, Rahul Gandhi had said that elections can be won with hatred, violence and anger, but this cannot solve the socio-economic problems facing the country.

Buoyed by the encouraging turnout of people, whose numbers had increased as the march progressed during the day, Gandhi -- who is also the MP from Wayanad Lok Sabha seat from Kerala -- had attacked the BJP by alleging that the saffron party has proved that hatred can be used politically and to win polls, but cannot generate employment.

He also alleged that conversation and the voice of the people have been silenced in India as the press was saying what the government of the nation wants it to say and that is due to the pressure brought on the owners of media organisations by the ruling dispensation.

"India's dream is broken, not scattered. To realise that dream, we are bringing India together. 100 km done. And, we have just begun," Gandhi tweeted at the end of the day's yatra.

AICC general secretary in-charge of communications Jairam Ramesh had tweeted that the Bharat Jodo Yatra has completed exactly 100 km and it has "rattled, unnerved and disturbed the BJP, whereas the Congress party has already been refreshed 100-fold. Every step we walk renews our resolve!"

At the end of 5 days the #BharatJodoYatra has completed exactly 100 kms. The padayatra has rattled, unnerved and disturbed the BJP, whereas the Congress party has already been refreshed 100-fold. Every step we walk renews our resolve! pic.twitter.com/eRzYBxsvoS

The 150-day foot march was launched from Kanyakumari in neighbouring Tamil Nadu on September 7 and will cover 12 states and two Union territories.

The Bharat Jodo Yatra, which entered Kerala on September 10 evening, will traverse through the state covering 450 km, touching seven districts over a period of 19 days before entering Karnataka on October 1.