'Fight is between me and the BJP in all 294 seats' 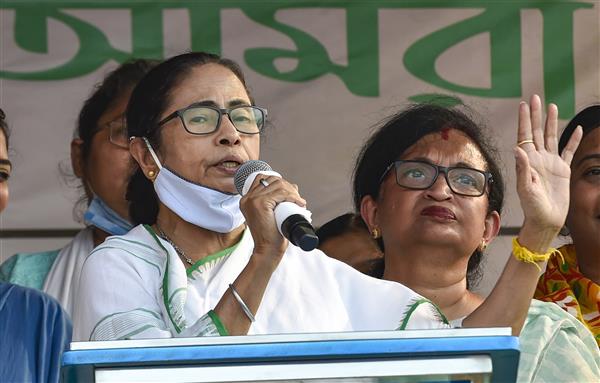 West Bengal Chief Minister Mamata Banerjee on Monday slammed Prime Minister Narendra Modi for “spreading lies and canards” against the TMC government, and said voters, this time, would witness ‘Didi versus BJP’ fight in all 294 constituencies of the poll-bound state.

Taking a dig at Modi over inclusion of his picture in COVID-19 vaccination certificates, she said the “day wasn’t far when the country will be named after him”.

Asserting that she will return to power for the third consecutive time in Bengal, the feisty TMC boss said, “The fight is between me and the BJP in all 294 seats.”

“The prime minister has named a stadium after him. He has put his photographs on COVID-19 vaccination certificates.

A day will come when the country will be named after him,” Banerjee, who led a rally here on the occasion of International Women’s Day, stated.

Rebutting the PM’s claim that women do not feel safe in Bengal, she said, “Had that been the case, they wouldn’t have been able to move around freely at night.”

Hitting out at the PM, Banerjee also said that Modi and Union Home Minister Amit Shah should shift focus on BJP-ruled states, including ‘model state’ Gujarat, “where, media reports suggest, four rapes and two killings have been recorded every day over the past two years.”

The TMC rally, which commenced in College Square area in central Kolkata, concluded near Dorina crossing, 5 km away.

Among others, actresses and now TMC candidates June Maliya, Saayoni Ghosh and Sayantika Banerjee were also seen taking part in the rally. PTI