The Lieutenant-General had gone in for an urgent heart stent surgery but contracted the virus at the end of the treatment; battled COVID-19 for eight days 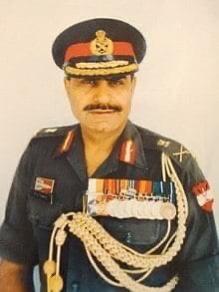 Lieutenant-General Raj Mohan Vohra, who was decorated with the second-highest gallantry award, Maha Vir Chakra during the Indo-Pak war of 1971, passed away at the age of 88.

According to his family members, he had gone in for an urgent heart stent surgery but at the fag end of the treatment contracted COVID-19, with which he had been battling for the past eight days.

Lieutenant-General Raj Mohan Vohra succumbed to COVID-19 on Sunday. The Army followed the COVID protocol while according him a military funeral with full service-honours in Delhi on today.

Hailing from Shimla, he was commissioned into 14 Horse in December 1952, and as a major, fought in the Punjab sector during the Indo-Pakistani War of 1965. As Lieutenant-Colonel during the 1971 war, he was commanding 4 Horse in Shakargarh sector, where he distinguished himself in combat.

“His regiment spearheaded the advance capturing in its wake at Bhairo Nath, Thakurdwara, Bari Lagwal, Chamrola, Darman, Chakra and Dehlra. Each of these positions was fortified with tanks, missiles and minefields. With complete disregard for his personal safety, Lieutenant Colonel Vohra moved well forward and provided inspiring leadership to the regiment. During the battle of Basantar River, his regiment, inspired by his personal example and courage, stood fast against repeated attacks by the enemy armour and destroyed 27 enemy tanks with minimal casualties to the unit. Throughout the operations, Lieutenant Colonel Vohra displayed conspicuous gallantry and inspiring leadership in keeping with the highest traditions of the Army,” the citation for his award reads.

Gen Vohra was from the first batch of the Joint Services Wing of the Indian Military Academy, which later became the National Defence Academy, Kharakvasla.

From 1961 to 1962 he served with the UN Peacekeeping mission in Congo and during the later stage of his career, he commanded a corps in the east and the Army War College in Mhow.

After a two-year stint as the General Officer Commanding-in-Chief, Eastern Command, he hung up his boots in May 1990.

Interestingly, Gen Vohra had four brothers, all of whom were cavalry officers and all rose to become generals. He is survived by his wife, son, daughter-in-law and a granddaughter. His other awards include the Param Vishisht Seva Medal and the Honorary ADC to the President.