Other pillars of the engagement include reviewing the strength of international institutions to serve the countries and the world, the resilient economy, and step up in the political understanding 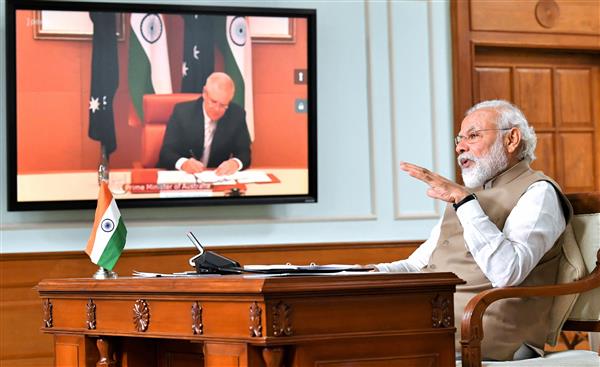 Characterising defence and strategic engagement between New Delhi and Canberra as the cornerstone of the slew of agreements signed during virtual summit between Prime Ministers Narendra Modi and Scott Morrison, Australian High Commissioner to India Barry O’Farell on Saturday said the bilateral ties go beyond what took the spotlight.

Elaborating in the light of first-ever such summit on Thursday, High Commissioner O’Farell said besides defence and strategic issues, two other pillars of the engagement include reviewing the strength of international institutions to serve the countries and the world, the resilient economy, and step up in the political understanding between the two leaders.

There is a desire on both sides to establish a strong and reliable supply chain business having learnt the lesson from what the world has seen in the recent time, he said taking part in webinar “India-Australia Partnership in the Indo-Pacific Region” organised by think-tank India Foundation along with his Indian counterpart A. Gitesh Sarma.

While defence cooperation was being stepped up with India and Australia signing Logistics Supply Agreement, the Indian envoy said as trust and understanding grows, New Delhi feels there are specific areas that can reflect new levels. For instance, taking security dimensions Australian companies prefer to give contracts in Information Technology to the US that in turn sub-contract it to Indian companies. This could change with greater understanding.

Australia, the High Commissioner said advocates a Free and Open Indo-Pacific that is inclusive and for economic prosperity according to rules and not pursuing ‘might is right’ as is being seen. As for Quad, he said it is a useful forum to coordinate in areas in which members agree. On his part, High Commissioner Sarma, said the geo-political situation for Australia is different from India.

On access to rare minerals, and High Commissioner O’Farell said India wants to use it to manufacture electric vehicles and Australia could be a reliable source to support it.  On Super Funds, he said, executives connected with these investors have been analyzing the situation and doing their own research stating that post-Covid19 may require recalibration in approach.