Demolitions of illegal structures in Kanpur, Prayagraj as per law, not related to rioting: UP to Supreme Court

Said the demolitions carried out by local development authority, which are statutory autonomous bodies 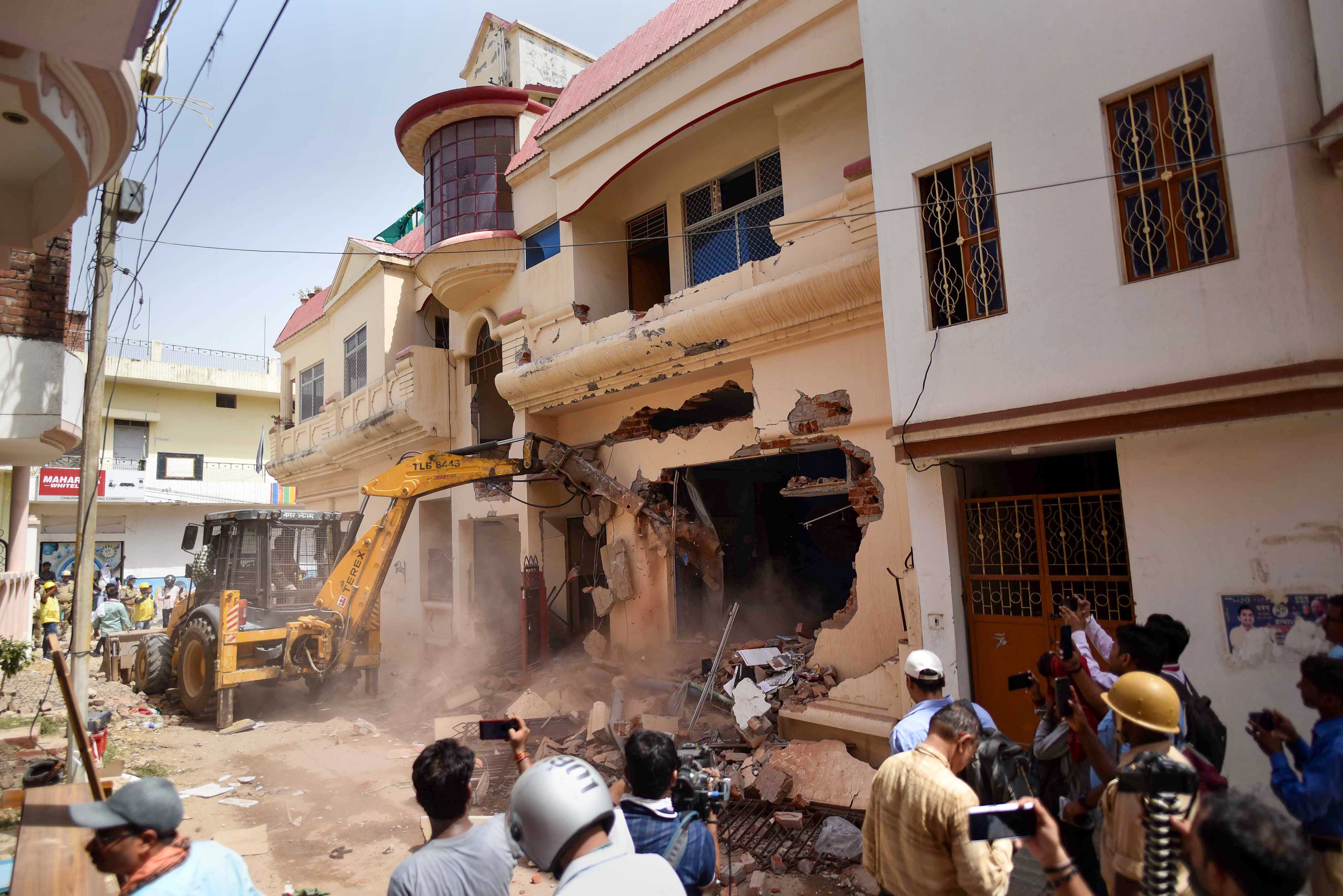 A bulldozer being used to demolish the residence of Javed in Prayagraj on June 12. PTI Photo

The Uttar Pradesh government has told the Supreme Court that demolitions of illegal structures were carried out by its Kanpur and Prayagraj municipal bodies as per law and were not related to punishing the accused involved in violent protests following remarks by two BJP leaders on Prophet Mohammed.

In an affidavit filed pursuant to pleas filed by a Muslim body Jamiat Ulama-I-Hind, the state government said, “the said demolitions referred to in the interlocutory applications have been carried out by the local development authority, which are statutory autonomous bodies, independent of the state administration, as per law as part of their routine effort against unauthorised/illegal constructions and encroachments, in accordance with the UP Urban Planning and Development Act, 1972”.

It said that none of the actual affected parties, if any, have approached this court concerning the lawful demolition action.

"It is humbly submitted that in so far as taking action against the persons accused in rioting, the state government is taking stringent steps against them in accordance with a completely different set of statutes namely--CrPC, UP gangster, and Anti-Social Activities (Prevention) Act, 1986 and Rules, 2021, Prevention of Public Property Damages Act and Uttar Pradesh Recovery of Damages to Public and Private Property Act, 2020 and Rules, 2021”, it said.

It pointed out that the factum of construction being illegal has also been admitted by the two builders in Kanpur.

It pointed out that the top court in a recent writ petition filed by a political party concerning the alleged demolitions in Shaheen Bagh here, noted that only the affected party and not political parties should come forward and allowed withdrawal of the petition with liberty to approach the High Court.

“Furthermore, it is submitted that even if any such alleged demolition action is to be challenged, the same is to be done by the affected party before the High Court, and not this court,” the state government said, adding that it is taking strong exception to the attempt by the petitioners to name the highest constitutional functionaries of the state and falsely colour the local development authority's lawful actions as “extra-legal punitive measures” against accused persons, targeting any particular religious community.

It said that all such allegations are absolutely false and are vehemently denied and urged the court to hold the petitioner to terms for the said false allegations without basis before this court.

The UP government further said that the petitioner has cherry-picked two demolition actions of illegal constructions in the properties of one Ishtiaq Ahmad and one Riyaz Ahmed that took place in Kanpur on June 11, 2022, in an attempt to falsely link the same to the rioting; however, it has failed to note that in both cases, certain portions of the two illegal/non-compliant structures in question took place; that both buildings were under construction and not in conformity with the permission granted.

It said that most importantly, proceedings under the Urban Planning Act against the two buildings had been initiated by the Kanpur development authority long before the incidents of rioting that took place in June 2022 - in one case way back in August 2020 itself, while in the other, in February 2022.

The state government gave the details along with the timeline about the demolition exercise of the properties of Ishtiaq Ahmad and Riyaz Ahmed, which was undertaken after following the due procedure under the law.

“Thus the perusal of the facts reveals those two instances of removal of unauthorised illegal constructions in Kanpur by the Kanpur Development Authority on June 11 were part of the ongoing demolition drive against encroachments and illegal constructions and had no relation to the riots as falsely alleged by the petitioner”, it said.

The state government said that petitioner Jamiat-Ulama-I-Hind has "deliberately obfuscated" the true facts to paint a nefarious picture of alleged malafides on the part of the administration and that too, without stating any facts on affidavit.

Similarly, it said that the petitioner while seeking relief, has cherry-picked one instance of demolition in the city of Prayagraj in respect of the demolition of the house of one Javed Mohammad on June 12.

“The petitioner has failed to disclose the fact that the proceedings under the 1973 Act and Rules by the Prayagraj Development Authority against the said person for illegal construction without any sanction at all, unauthorised use of residential land as an office, had been initiated much prior to the incidents of rioting”, it said.

The state government said, “The petitioner herein has attempted to give a malafide colour to lawful action taken by the local development authorities as per the procedure established by cherry-picking one-sided media reporting of a few incidents and extrapolating sweeping allegations from the same against the State. The same it is submitted is completely false and misleading”.

On June 16, stating that "everything should be fair" and authorities should strictly follow the due procedure under the law, the top court gave the Uttar Pradesh government and its authorities three days to respond to pleas which alleged that the houses of those accused in recent violence were illegally demolished.