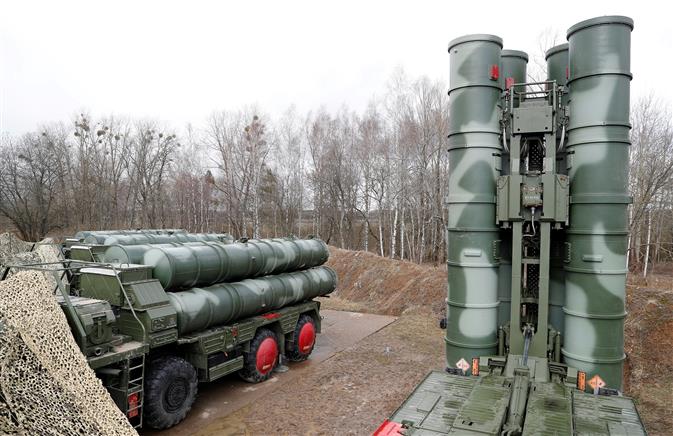 A view shows a new S-400 missile system after its deployment at a military base outside the town of Gvardeysk near Kaliningrad, Russia. Reuters file

A few days after the US warned India of sanctions if it went ahead with the purchase of Russian S-400 air defence systems, the Russian embassy here hosted a team of Indian military specialists heading to Moscow.

In his welcoming speech, Russian Ambassador Nikolay Kudashev not only described S-400 supplies as “one of the flagship projects” in Russian-Indian military and military-technical cooperation but listed a host of defence projects both nations are negotiating. “Your departure is marking a new stage in our strategic partnership,” Kudashev told the departing team.

The Americans have made it clear to all of its allies and partners to forgo transactions with Russia as they risk triggering sanctions under the CAATSA (Countering America's Adversaries Through Sanctions Act) which does not have any blanket or country-specific waiver provision.

The Ministry of External Affairs was resolute but restrained in its response. “India and the US have a comprehensive global strategic partnership. India has a special and privileged strategic partnership with Russia,” said MEA spokesperson Anurag Srivastava when asked about the proposed S-400 purchase.

“India has always pursued an independent foreign policy. This also applies to our defence acquisitions and supplies which are guided by our national security interests. We have not made any waiver determinations with respect to Indian transactions with Russia,” he had added.

At the send-off function for the military specialists, Kudashev listed more joint projects – an AK-203 Kalashnikovs factory to make over seven lakh rifles in India, building of 200 Ka-226 also in India, upgrades to Su-30MKI and T-90 tanks besides frigates, submarines and missiles.

The Russian ambassador said Russia and India are also involved in the joint development and production of military equipment, components and spare parts as well as technologies sharing, improving after-sales service system. “We have developed an advanced legal base for this purpose,” he said.

The next joint step in the military field is likely to be the implementation of the spare parts joint production agreement, which would fit well in Make-in-India and Atmanirbhar Bharat programmes. “Work also is going on the mutual logistics support agreement, strengthening maritime cooperation, including in the Indian Ocean,” added the Ambassador.