Despite US disapproval, India and Russia for hi-tech weapons manufacturing

No plans for Russia-China military alliance; such ties are counterproductive: Lavrov 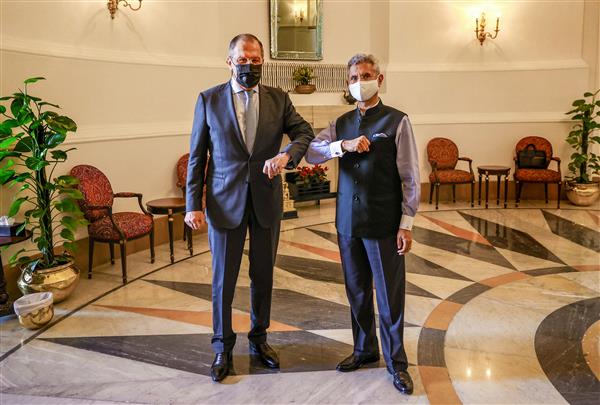 Noting that Russia is the only partner that transfers cutting-edge military technology to India, Lavrov said talks touched on manufacturing of state-of-the-art weapon systems.

“In this strategically important area, Russia is a major foreign contractor for New Delhi. I am sure deepening of Russian Indian military cooperation serves the national interest of both countries,” said Lavrov.

Denying that he had said US exercises pressure on India, Lavrov said there were no discussions on statements from the US against arms trade with Russia.

In a departure from top US officials advising India to cut down on arms purchases from Russia, Lavrov said Moscow respected the right of India to diversify ties in these areas. Both sides also touched on cooperation in energy, including nuclear, peaceful exploration of space and manned programs, rocket engine building, satellite navigation, the Russian Far East and the Arctic.

Fresh from a meeting with Chinese Foreign Minister Wang Yi last month, Lavrov said though Russia-China relations at the summit-level are at their highest levels in history; there are no discussions on a military alliance. Whether it was a Russia-China military alliance or talks of a Middle East NATO or an Asian NATO, “we believe it is counterproductive. Our Indian friends have the same position,” he observed.

Lavrov hinted that in addition to an in-person summit of BRICS leaders in India next month, Moscow was also encouraging the idea of a Russia-India-China summit.

In a pre-visit interview, he said Russia was closely watching the process of normalisation at the LAC and welcomed the agreements reached after the Jaishankar-Wang Yi telephone conversation on February 25 aimed at resolution of the situation.

Afghanistan was a major area of discussions between the two Foreign Ministers as were other “thorny issues” in the neighbourhood such as Yemen, Syria and Iran. Lavrov described India as a “key player” for a peaceful settlement in Afghanistan and “definitely should be engaged in international efforts supporting Afghan national reconciliation process”.

Jaishankar, back from Heart of Asia – Istanbul Process conference in Dushanbe last week, said he stated that a durable peace would require harmonising interests of all, both within and around that country.