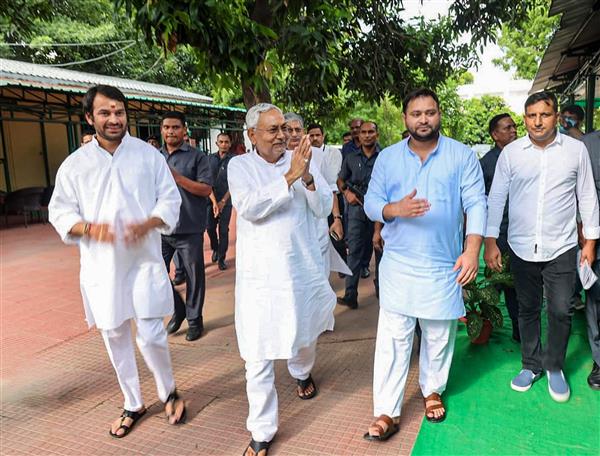 Opposition parties on Tuesday said the JD(U) breaking ranks with the BJP is a “strong indictment” of the saffron party’s “politics of intimidation” and shows a change in Indian politics.

Earlier in the day, Bihar Chief Minister Nitish Kumar met Governor Phagu Chauhan and tendered his resignation. This came after the decision to quit the BJP-led NDA was taken at a meeting of JD(U) MPs and MLAs at Kumar’s residence.

“#NitishKumar breaking alliance with BJP is a strong indictment of the politics of intimidation practiced by BJP.

“BJP’s authoritarianism leaves no scope for cooperation. After Akalis & Shiv Sena, JD(U) is latest example. Cracks are visible in the relationship of BJP & AIADMK too,” Communist Party of India (CPI) general secretary D Raja said in a tweet.

CPI MP Binoy Viswam said the events in Bihar indicate that a change is underway.

“Bihar conveys the message of far reaching change in Indian politics. It’s final outcome depends up on the level of insight expected from the important players. The left will definitely play the responsible role in its consistant fight against RSS-BJP (sic),” said Viswam in a tweet.

Trinamool Congress MP Derek O’Brien said the situation in Bihar is one of the reasons behind the Parliament session being cut short by the government.

The monsoon session of Parliament ended four days ahead of schedule on Monday.