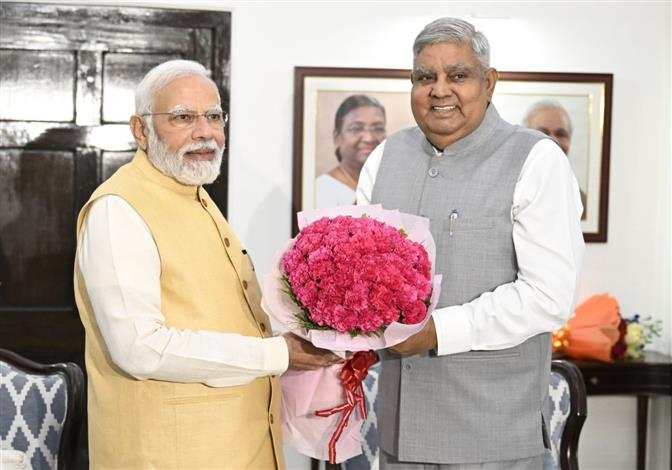 Dhankhar, 71, will take oath on August 11, a day after incumbent M Venkaiah Naidu demits the office.

As many as 725 of the total 780 electors cast their vote, of which 15 were found invalid. The turnout was 92.94 per cent. A candidate needed 356 votes to get elected and of all valid votes, Dhankhar secured 528 (74.36 per cent), recording the highest winning margin in the last six vice-presidential elections since 1997. In 1992, KR Narayanan, who had secured 99.86 per cent votes, won by a margin which still remains the highest ever.

The nation will benefit from your long and rich experience of public life. —Droupadi Murmu, President

All MPs, including nominated ones, are entitled to vote in the vice-presidential election. As many as 55 members chose to abstain from the voting. It will be for the first time that the presiding officers in both Houses will be from one state (Rajasthan).

Congratulating Dhankhar, Alva in a series of tweets said, “I would like to thank all leaders of the Opposition, and MPs from across parties who voted for me in this election.”

It’s a matter of joy for the nation that a farmer’s son has been elected Vice-President... He will prove to be an ideal guardian of the Constitution. —Amit Shah, Union Home Minister

Taking a dig at the TMC, she said, “This election was an opportunity for the Opposition to work together and build trust. Unfortunately, some parties chose to directly or indirectly support the BJP in an attempt to derail the idea of a united Opposition.”

PM Narendra Modi was the first to meet Vice-President-elect Dhankhar to congratulate him. BJP president JP Nadda also met Dhankhar at the residence of Union Minister Pralhad Joshi here. Union Home Minister Amit Shah said, "It is a matter of joy for the nation that a farmer's son has been elected as the Vice-President."

The BJP, while announcing Dhankhar’s candidature, had described him as “kisan putra”. The move was seen in the political circles as an attempt to reach out to the politically significant Jat community, which had participated in huge numbers in the year-long protests against the now-repealed farm laws.