Did not enter Congress presidential race to oppose anyone, told Tharoor better to have consensus candidate: Mallikarjun Kharge : The Tribune India

Did not enter Congress presidential race to oppose anyone, told Tharoor better to have consensus candidate: Mallikarjun Kharge 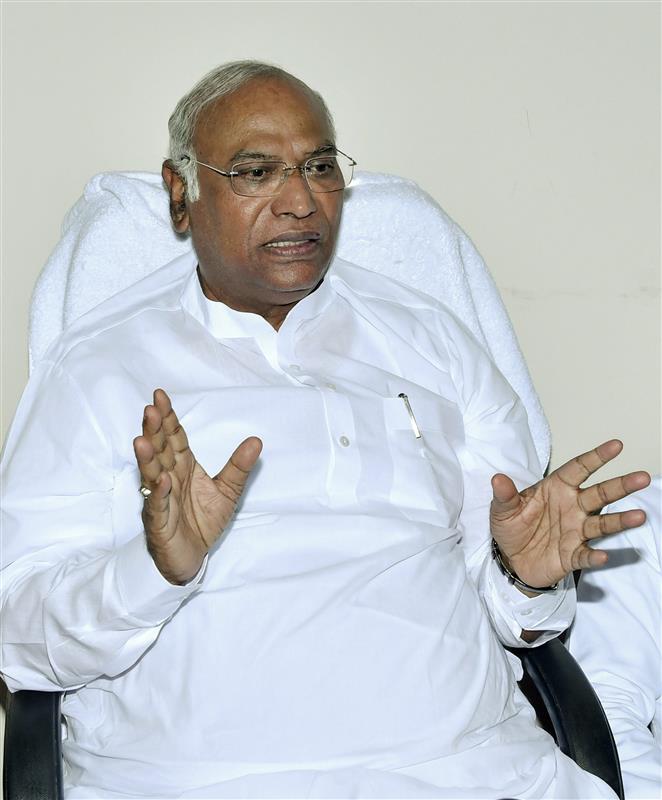 Nominee for the Congress president post Mallikarjun Kharge on Sunday said he told fellow contender Shashi Tharoor that it would be better to have a consensus candidate, but the Lok Sabha MP insisted on a contest for the “sake of democracy”.

Kharge said if he becomes the party chief, he will consult the Gandhi family and other senior leaders and implement the good things suggested by them, even as he rejected claims that he was the “official candidate” backed by the Gandhis.

Launching his Congress presidential poll campaign with a press conference at his residence here, 80-year-old Kharge said there is no G-23 camp now and all those leaders want to fight unitedly against the RSS-BJP and therefore are supporting him.

Several dissident leaders such as Bhupinder Hooda, Anand Sharma, Manish Tewari and Prithviraj Chavan of the group of 23, which had written to party chief Sonia Gandhi in 2020 for large scale organisational reform, have put their weight behind Kharge by becoming his proposers instead of backing Tharoor who was a prominent member of the grouping.

Kharge said all senior leaders and youth leaders urged him to contest the polls as no member of the Gandhi family—Sonia Gandhi, Rahul Gandhi and Priyanka Gandhi Vadra—wanted to become the party chief.

“All my colleagues told me to fight the party president poll and on their calling and encouragement, I got inspiration as they extended their cooperation...because Sonia Gandhi, Rahul Gandhi, and Priyanka Gandhi do not want to become president,” he said.

Kharge asserted that he had not entered the poll fray to oppose anyone but to strengthen the Congress through his views and to take forward the party ideology.

He said that in line with ‘one person, one post’ principle of the party, he resigned as Leader of Opposition in Rajya Sabha on the day he filed the nomination.

Kharge elaborated on his political journey of struggles and successes, and asserted that working for a party is not a part-time job but a full-time work.

“I have been working full-time. If I sat in Parliament then I would get up only in the evening at the time of shut down. It is my habit that whatever I take up, I work sincerely,” he said.

Asked about Tharoor’s remarks that Kharge is a candidate of continuity and status quo, the Rajya Sabha MP said, “He (Tharoor) may have his views...The status quo and reforms he talks of will be decided by the 9,300-odd delegates, after that a committee will be formed (Congress Working Committee). The committee as a whole will decide all policy matters that will be formulated by consensus and we will implement that.” “It will not be done by one person. For me the key word is ‘Hum (We)’ instead of ‘main (Me). We will decide together and wherever there are shortcomings, we will take action,” he said..

Kharge said senior leaders urged him to contest in view of the pressing issues facing the country such as high unemployment, rising inflation, widening gap between the rich and the poor and the BJP not fulfilling any of its promises.

“Will always work to take forward party’s principles and ideology,” he said.

Rejecting claims that he was the official candidate and the BJP’s criticism that the Gandhi family will wield real power, Kharge said the BJP always tries to undermine the Congress.

Kharge said the Gandhi family has sacrificed a lot for this country and pointed out that Sonia Gandhi did not even want to join politics and was persuaded on the pretext that the country needs her services and she strengthened the party.

“For 10 years, we were in government, did she try to become PM or efforts made to make Rahul Gandhi PM. Her sacrifice for the party is very big. Rahul Gandhi is undertaking the Bharat Jodo Yatra not just for the party but is fighting against unemployment, to bring unity among people. So, when you get to learn something you must. I will consult them and other senior leaders, but that does not mean that I did not learn anything in 50 years,” he said.

“I will consult the Gandhi family and will take good things from them and also implement and inculcate them,” he said.

Dismissing suggestions that he is Gandhis’ candidate, Kharge said all senior leaders had come out in his support during the day of the nominations.

Talking about Tharoor’s phone call to him after nominations, Kharge said he told him that it would be “better to have a consensus candidate to which he (Tharoor) said that there should be a fight in a democracy, and then I said ok”.

“When a candidate decides to contest, how I can stop him. So, he is fighting and he is my younger brother. It is a family matter and we have to stay united today and tomorrow,” Kharge asserted.

He also said he was not fighting the polls as a Dalit leader but as a Congress worker who has served the party for 55 years.

Kharge and Tharoor were left in the fray in the Congress presidential poll after former Jharkhand minister K N Tripathi’s nomination was rejected on Saturday.

The polling, if needed, will be held on October 17. The counting of votes will be taken up on October 19 and the results will be declared the same day.

More than 9,000 Pradesh Congress Committee (PCC) delegates will vote in the poll. PTI