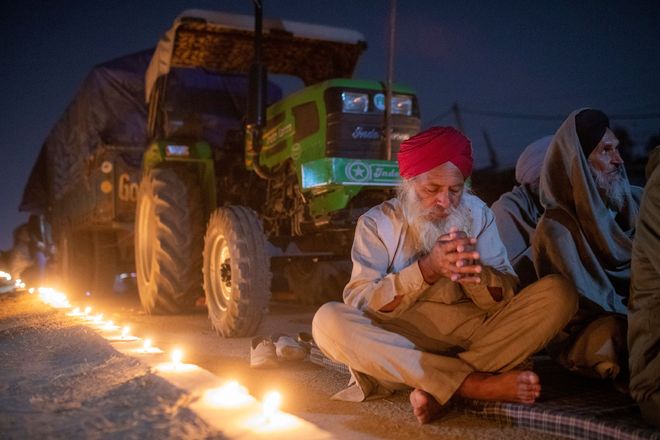 Power of prayer: A farmer prays to mark the 551st birth anniversary of Guru Nanak Dev, the first Sikh Guru and founder of Sikh faith, at the Singhu border near Delhi. REUTERS

The cyberspace is abuzz with links for protest petitions being shared not just here but in the UK, Canada, Australia and the US in favour of the farmers’ agitation against three recently passed farm laws.

Over the last two days, over two lakh people have signed petitions demanding justice for the farmers. The rapidly growing petitions have in fact been started by Indian nationals living in the UK, Canada and the US.

A large part of Indian diaspora in these countries comprises Sikhs from India’s Punjab province, which also happens to be the hotbed of the ongoing farmers’ agitation.

The biggest petition among these was started by the American Sikh Council and has been signed by over 50,000 people over the last three days. Similarly, a petition by Prabhjot Bath, a resident of the UK, has received over 50,000 signatures.

Another rapidly growing petition, titled “Justice for farmers of India”, was started by Canada-based Gina Takhar on Saturday. Mindy Athwal’s petition, started from Wolverhampton in the UK, has been signed by over 30,000 persons, while a similar number of people have signed another petition by Parminder Brar, a resident of Canada. A petition by Ravinder Uppal from Birmingham in the UK has been signed by almost 10,000 citizens, while another one started by US-based Kiran Badesha has received over 4,000 signatures.

Most petitions seek a rollback or rethink on the new farm laws. However, some like Chandigarh resident Shubh Karman wants Navdeep Singh, son of a farmer, to be acquitted in his petition. Navdeep shot to fame on Friday after images of him climbing atop a water cannon being used on the farmers to turn off the tap went viral. Navdeep was charged with attempt to murder.