Theatres in Maharashtra and Chhattisgarh opened in November 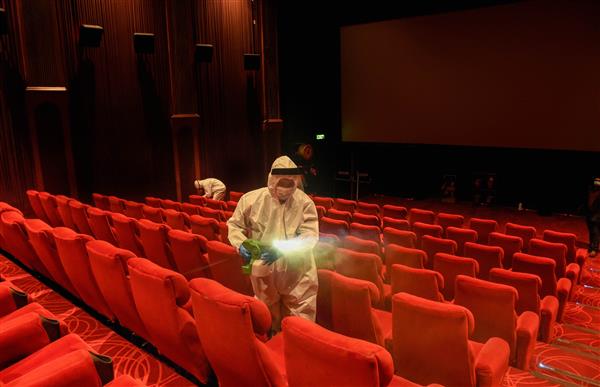 Film exhibitors and cinema hall owners have welcomed the decision of the Ministry of Home Affairs (MHA) to increase the capacity of theatres and described the move as “a big shot in the arm” for the film industry that will help the entertainment sector get back on its feet.

The MHA on Wednesday allowed cinema halls and theatres to operate with more people in fresh COVID-19 reopening guidelines, to be effective from February 1.

Kamal Gianchandani, CEO of PVR Pictures, said they are thankful to both the MHA and Ministry of Information & Broadcasting for relaxing the capacity cap in theatres.

“It is an extremely positive move and a big shot in the arm of the film entertainment sector. This has come in a timely fashion a lot of Tamil, Telugu, Kannada and Malayalam films are being lined up for release in February. This move will help a lot of these films,” Gianchandani of PVR Pictures, the largest theatre chain in India, told PTI.

According to the senior executive, the decision will also encourage Hindi film producers to release their films.

“It will encourage a lot of Hindi producers who are ready with their films and for whom 50 per cent capacity was becoming a deterrent and this relaxation of capacity cap,” Gianchandani said.

Post lockdown, the Centre had allowed reopening of theatres and multiplexes in several regions, including Delhi, parts of Madhya Pradesh and Gujarat on October 15, 2020, with 50 per cent occupancy, functioning with stringent dos and don’ts, keeping in view the new normal.

Theatres in Maharashtra and Chhattisgarh opened in November, whereas cinema halls in Tamil Nadu and Kerala resumed operation in early January.

Both “Radhe - Your Most Wanted Bhai”, starring Salman Khan, and John Abraham’s “Satyameva Jayate 2” are scheduled for an Eid release. Shahid Kapoor’s “Jersey” will release on Diwali, while Ajay Devgn-starrer “Maidaan” will arrive in theatres on October 15 on Dussehra holiday.

Leading distributor Akshaye Rathi, who owns eight theatres in Maharashtra, is hopeful that the increased capacity would translate into release of the much-awaited tentpole movies.

The current box office environment, thanks to the recent success of south films like “Master” and “Krack”, is also conducive to release Hindi films, he added.

“Cinemas thrive when tentpole films release. There are Tamil, Telugu films releasing but the impact of it is not as high in the Hindi belt. Hindi films generate a king share of business,” Rathi told PTI.

“We intend to bring one big film in the last week of March and first week of April. We have not yet decided what and when,” Sarkar, whose company has “Sooryavanshi” and “83” lined up for release, told PTI.

Bihar-based exhibitor Vishek Chauhan said it is the best news for the industry in a while.

He said though the theatres in the state had opened on October 15, it has only been a downhill journey as there hardly any films released then.

“The SOP (Standard operating procedure) that we are expecting will not give us a 100 per cent occupancy but maybe an 80-85 per cent. You can release any big film at 80 per cent occupancy. But now the ball is in Bollywood’s court,” Chauhan told PTI.

Gianchandani said PVR Pictures, which has 835 screens across India, is prepared to welcome more audiences as they have all the necessary safety measures in place.

“We mastered it extremely well in south India in terms of safety protocol we made at the theatres,” he said.

Days after permitting 100 per cent occupancy in movie theatres while adhering to COVID-19 guidelines, the Tamil Nadu government withdrew its decision earlier this month and said the capacity shall be restricted to 50 per cent.

The government, however, allowed theatres to screen additional shows as per a directive of the Madras High Court and said the order would be in force with immediate effect.

“With ‘Master’, we have handled big crowds and there was no issue. Now with more people coming in theatres, there will absolutely be no problem,” Gianchandani added.

However, Rajasthan-based senior distributor and exhibitor Raj Bansal rued that cinemas in the state continue to remain shut, even as almost every other region was up and running.

“In our state, the cases are very much under control. There are about 10,000 people affected due to cinema halls being shut,” Bansal told PTI.

He said he hopes theatres in Rajasthan will open soon and big releases will breathe new life into the state’s cinema halls starting Holi festival in March.

Kunal Sawhney, Senior Vice-President, Operations and Business Development, Carnival Cinemas said the move was highly awaited as every other industry has opened up.

“We wish that the government has seen the precautions that all cinemas have taken (so far). We are looking at a higher percentage of capacity to sell and open balance states which are not yet open,” Sawhney told PTI.

Due to the shutdown, several films such as “Gulabo Sitabo”, “Shakuntala Devi” and “Gunjan Saxena: The Kargil Girl” released on digital platforms. — PTI