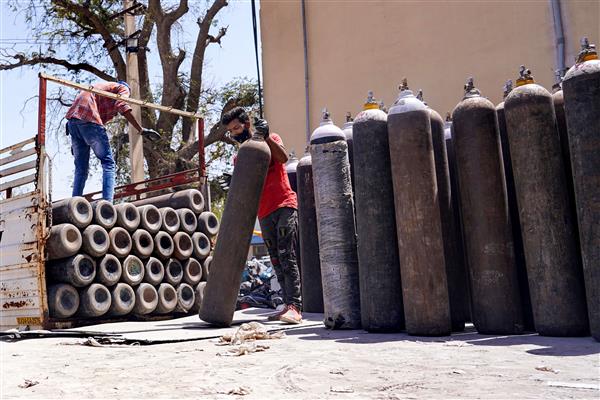 Workers sort oxygen cylinders, being used for COVID-19 patients, at a facility in Jawaharlal Nehru Hospital in Ajmer, Thursday. PTI

The Centre on Thursday issued an order directing all the state governments and the Union Territories (UT) administrations to ensure the uninterrupted supply of medical oxygen across the country for management of COVID-19 patients, as it made the district level administrative and police heads “personally liable” in this regard.

The order, which was issued by Union Home Secretary Ajay Bhalla in the capacity of the chairperson of the National Executive Committee under the Disaster Management Act, has given direction to ensure that “no restriction shall be imposed on the movement of medical oxygen between the states” and has asked them that transport authorities “shall be instructed accordingly to allow free inter-state movement of such vehicles”.

“No authority shall attach the oxygen carrying vehicles passing through the districts or areas for making supplies specific to any particular district or area,” it said.

In the order, Bhalla also directed the authorities to ensure that “no restriction shall be imposed on oxygen manufacturers and suppliers to limit the oxygen supply only to the hospitals of the states and UTs in which they are located”.

It also reiterated its earlier order saying supply of oxygen for industrial purposes, except those exempted by the government, “is prohibited with effect from April 22, 2021 and till further orders”.