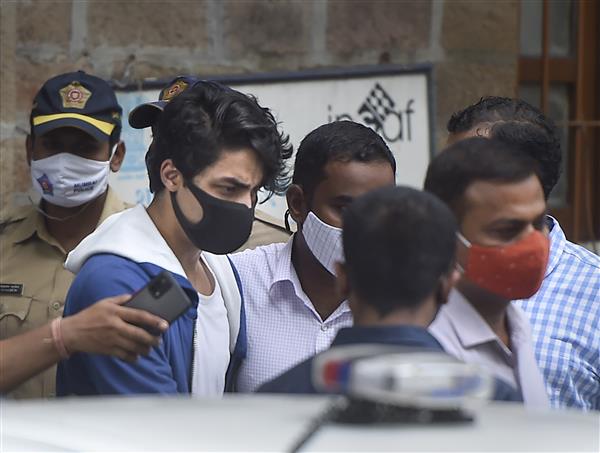 Bollywood actor Shahrukh Khan's son Aryan Khan being taken to Arthur Road jail from Narcotics Control Bureau (NCB) office after being arrested in connection with the alleged seizure of banned drugs from a cruise ship in Mumbai on October 8, 2021. PTI photo

A magistrate's court has no jurisdiction to entertain a bail application for an offence with prescribed punishment of more than three years under the Narcotic Drugs and Psychotropic Substances (NDPS) Act as it is triable by a special court, an order rejecting the bail of Aryan Khan and two others who were held in the cruise ship drugs case said.

In the 15-page order, the details of which were made available on Saturday, the ACMM said "this court ceases its jurisdiction to entertain the applications for bail" considering section 36A and the fact that all three were held for one crime under various provisions of the NDPS Act for which the prescribed punishment was more than three years.

All the alleged offences are exclusively triable by the special court, his order further stated.

Aryan Khan, son of Bollywood superstar Shah Rukh Khan, as well as Arbaaz Merchant and Munmun Dhamecha were arrested on October 3 following the alleged seizure of banned drugs aboard a cruise ship off the Mumbai coast.

They have been booked under various provisions of NDPS Act and are currently in judicial custody.

So far, 18 people have arrested by the Narcotics Control Bureau in connection with the incident.

The ACMM's court noted the investigation revealed that allegations leveled against all the accused are in respect of consumption, sale and purchase, with intermediate quantity as well as commercial quantity of narcotic drugs and psychotropic substances allegedly being seized, for which the punishment prescribed is more than three years.

While lawyers arguing for bail for the accused cited various previous orders, the ACMM's court said such decisions were not useful as facts and circumstances of the present case were at hand, adding that the cited supra decisions differed from each other.

"The same are related to the powers of the Sessions Court and the High Court. Considering all these aspects, the bail applications filed by the accused are not maintainable before this court. The same are required to be rejected," he added.

When the matter came up for hearing earlier on Friday, Additional Solicitor General Anil Singh had challenged the bail pleas claiming the magistrate court had no jurisdiction to hear such applications in this matter.

A lawyer said Khan, Merchant and Dhamecha are likely to move the Sessions court for bail on Monday.

The three and others were held after the NCB raided a Goa-bound cruise ship on the evening of October 2.

Meanwhile, the magistrate court on Saturday sent Achit Kumar, who was held based on the statement of Khan and Merchant, to judicial custody.

The NCB has claimed Kumar used to supply drugs to the duo. — PTI