ED kept me in room without window and ventilation during custody: Sanjay Raut tells court

Raut's ED custody has been extended till August 8 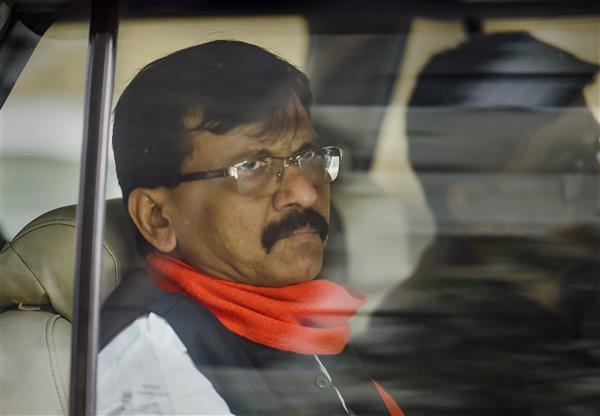 Shiv Sena MP Sanjay Raut being taken for a medical check-up by the Enforcement Directorate officials in Mumbai. PTI

Shiv Sena leader Sanjay Raut, arrested by the Enforcement Directorate (ED) in a money laundering case, on Thursday told a special court here that during the custody, the central agency had kept him a room that had no window and ventilation.

The ED had arrested the Sena MP on Sunday midnight in connection with the alleged financial irregularities in the redevelopment of Patra 'Chawl' (old row tenement) in suburban Goregaon and related financial property transactions involving his wife and alleged associates.

On Monday, the court had remanded him in ED custody till August 4. At the end of his remand, the agency on Thursday produced him in the special court, which extended his ED custody.

During the hearing, when the court asked Raut if he had any complaint against the ED, he said there was nothing in particular. However, he added that the room where he was kept had no window and ventilation.

The court then sought an explanation from the probe agency.

Special public prosecutor Hiten Venegaokar, who appeared on behalf of the ED, said Raut was kept in an AC room and hence there was no window. Raut later said that although the AC system is there, he cannot use it due to his health condition.

The ED then assured the court that he would be kept in a room with proper ventilation.

On Monday, the ED had told the court that Raut and his family received "proceeds of crime" worth over Rs one crore generated out of alleged irregularities in the housing redevelopment project.

The 60-year-old Rajya Sabha member is a close associate of Shiv Sena president Uddhav Thackeray. He is also the chief spokesperson of the Sena and the executive editor of party mouthpiece 'Saamana'.