Uddhav Thackeray calls it conspiracy to finish off party 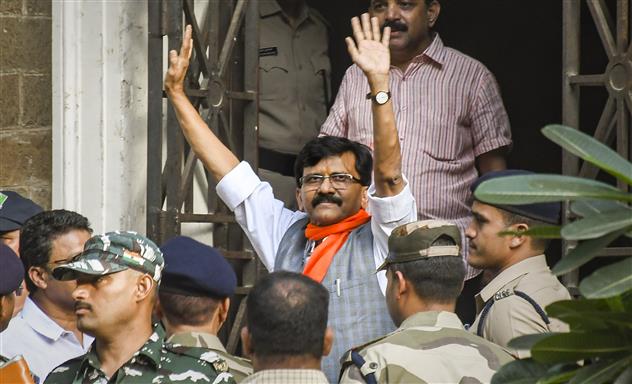 The Enforcement Directorate (ED) probing the alleged Patra ‘chawl’ land deal scam today conducted searches at Shiv Sena MP Sanjay Raut’s residence at suburban Bhandup in Mumbai for nine hours and questioned him before shifting him to the agency’s office in the evening, officials said.

False action, false evidence but won’t bow down. I will never leave Shiv Sena. I swear by Balasaheb Thackeray that I am not involved in any scam. Sanjay Raut, MP

Before being taken to the ED’s south Mumbai office, Raut claimed he was being “framed on the basis of false evidence, but he won’t bow down or quit the party”. “They (ED) are going to arrest me,” Raut told mediapersons outside the ED office.

“Jhukega nahin’ (won’t bow down),” the Sena MP said, putting up a brave front. He alleged that the probe agency’s action was aimed at weakening the Shiv Sena and Maharashtra, and that a “false” case had been prepared against him.

Talking to reporters outside the agency’s office, Raut’s lawyer Vikrant Sabne said, “The ED issued fresh summons to Sanjay Raut this morning. On that basis, he came to the ED office to record his statement. He has neither been arrested nor detained.” The lawyer said ED officials had already taken documents that they felt were important. “Some property documents were seized, but no documents related to Patra ‘chawl’ were taken by them,” he said.

After the ED action began early morning, Raut tweeted that he “will die, but will not surrender and never leave Shiv Sena”. At 7 am, ED officials accompanied by CRPF personnel reached Raut’s ‘Maitri’ bungalow in Mumbai and began the search. The action followed two ED’s summonses against him, the latest on July 27.

A loyalist of Shiv Sena chief Uddhav Thackeray, Raut was summoned for questioning in the case linked to the alleged irregularities in the redevelopment of a Mumbai ‘chawl’ and related transactions involving his wife and “associates”.

He had appeared before the agency in Mumbai to record his statement on July 1, but skipped two summonses thereafter citing the ongoing Parliament session.

Uddhav alleged that the agency’s action against Raut was part of a “conspiracy” to finish off the party. Maharashtra Chief Minister Eknath Shinde said if Raut was innocent, he should not be afraid of the ED action against him.