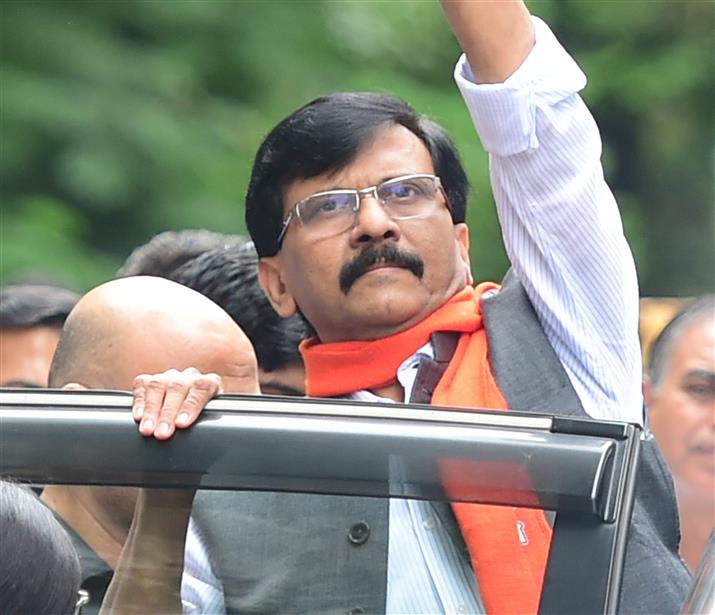 Shiv Sena MP Sanjay Raut waves to his supporters while being produced in a special court in connection with a money laundering case, in Mumbai, Thursday, Aug. 4, 2022. PTI

The Enforcement Directorate (ED) has summoned Varsha Raut, wife of arrested Shiv Sena MP Sanjay Raut, for questioning in a money laundering investigation linked to alleged irregularities in the redevelopment of a local ‘chawl’ and linked transactions, officials said on Thursday.

Varsha Raut is expected to be confronted with her husband and some other accused involved in the case once she deposes before the central agency at its office in Ballard Estate later this week.

Sanjay Raut was arrested by the ED in this case on August 1 and a local court on Thursday sent him to further custody till August 8.

The ED had earlier told the court that Sanjay Raut and his family received “proceeds of crime” worth over Rs 1 crore generated out of alleged irregularities in the housing redevelopment project.

The 60-year-old Rajya Sabha member is a close aide of Shiv Sena president and former Maharashtra chief minister Uddhav Thackeray. He had denied any wrongdoing and had called the ED case against him as “false”.

In April, the ED had provisionally attached assets worth over Rs 11.15 crore of Varsha Raut and two of associates of Sanjay Raut as part of its probe.

The attached properties are in the form of land held by Pravin M Raut, Sanjay Raut’s aide and a former director of Guru Ashish Construction Private Limited, at Palghar, Saphale (a town in Palghar) and Padgha (in Thane district).

The agency is understood to have been questioning Sanjay Raut about his “business and other links” with Pravin Raut and Patkar and also about the property deals involving his wife.

After arresting Pravin Raut in February, the ED had said he appears to be “acting as a front” or in collusion with some influential person.

The agency had also said Pravin Raut had made payments to certain “politically-exposed persons”.

In the Alibaug land deal, apart from the registered value, “cash” payments were made to the sellers, the agency had alleged.

Pravin Raut was arrested by the ED in a probe linked to a Rs 1,034-crore alleged land scam related to the redevelopment of the Patra “chawl” in Mumbai’s Goregaon area. He is currently in judicial custody.

Guru Ashish Construction Private Limited was involved in the redevelopment of the “chawl”, which had 672 tenants living in tenements on 47 acres belonging to the Maharashtra Housing Area Development Authority (MHADA), the ED had said earlier.