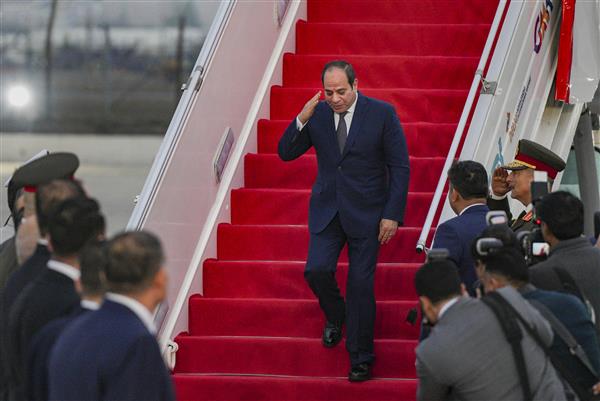 Egyptian President Abdel Fattah El-Sisi, who will be the chief guest at R-Day parade, in New Delhi. PTI

Egyptian President Gen Abdel Fattah El-Sisi (retd) arrived here on Tuesday for a three-day state visit that seeks to turnaround ties with India that were earlier predicated on Cairo’s ties with Islamabad.

Egypt, which is in deep economic trouble, is, however, not focusing on just trade and investment but is also keen to enhance ties in defence, agriculture and the digital domain. Egypt is a key player in the politics of both the Arab world as well as Africa and is also seen as a gateway to markets in Africa and Europe.

Prime Minister Narendra Modi will hold talks with Gen Sisi on Wednesday after which they are slated to ink half a dozen agreements.

The 68-year-old Egyptian strongman, who crushed the Muslim Brotherhood that had capitalised on the Egypt Spring Revolution, will be the Chief Guest at the Republic Day celebrations on January 26.

Gen Sisi is accompanied by a high-level delegation that will include five ministers and senior officials while a military contingent is already here and has practiced with its Indian counterparts before its participation in the Republic Day parade.

The Egyptian President had first visited India in 2015 to participate in the third India-Africa Forum Summit which was followed by a state visit in 2016.

Sisi will first be accorded a ceremonial welcome at the Rashtrapati Bhavan on Wednesday and will lay a wreath at Rajghat. External Affairs Minister S Jaishankar will also call on Sisi. “The forthcoming visit of President Sisi is expected to further strengthen and deepen the time-tested partnership between India and Egypt,” said the MEA on the visit.

In the evening, President Droupadi Murmu will host a state banquet in honour of the visiting dignitary.