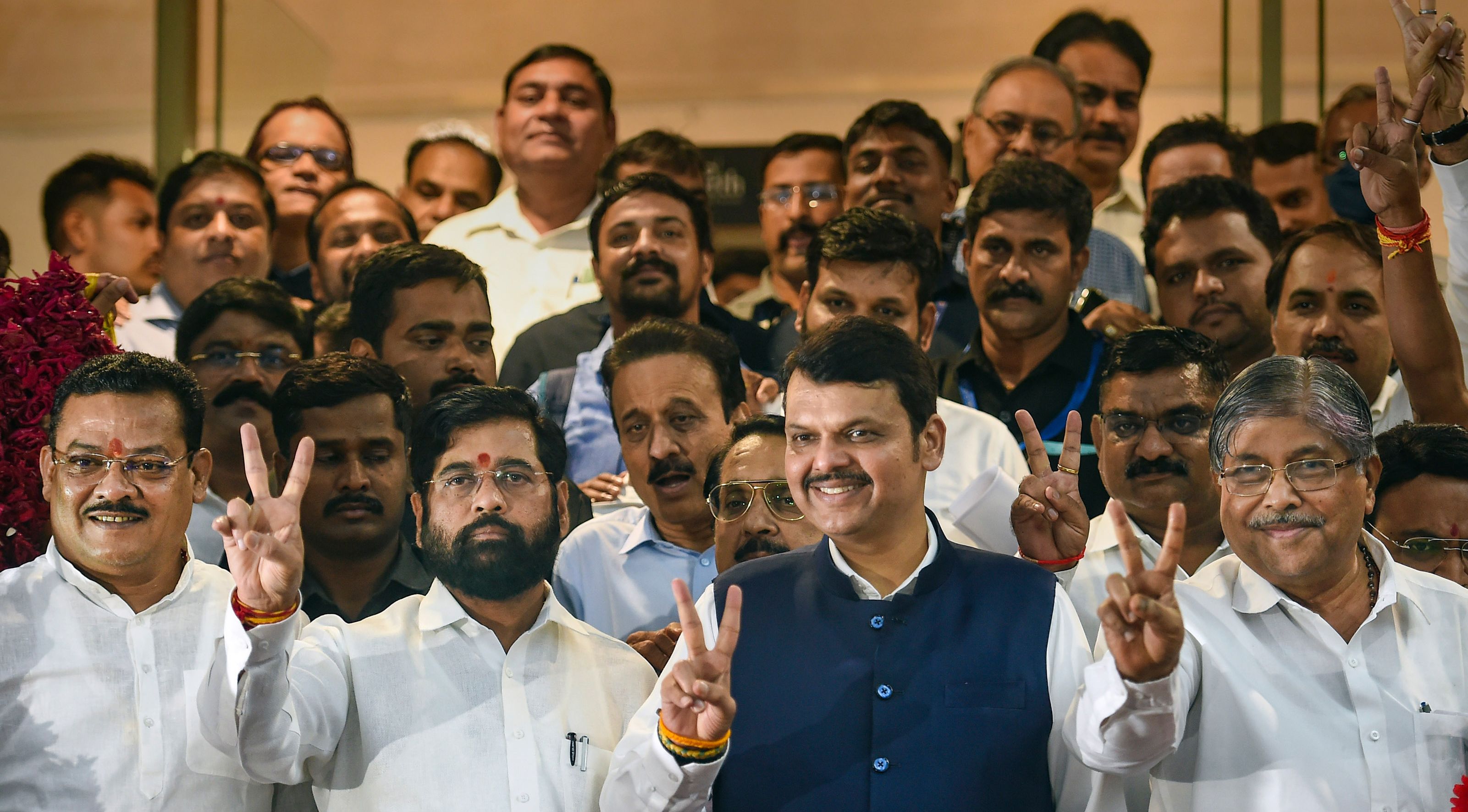 Maharashtra CM Eknath Shinde and Deputy CM Devendra Fadnavis along with other MLAs after winning the trust vote on Monday. PTI

Five days after he took oath as the Maharashtra Chief Minister following a rebellion in the Shiv Sena, Eknath Shinde today comfortably won the trust vote in the state Assembly with 164 votes being polled in his favour and 99 against him in the 288-member House.

The development came as the Supreme Court on Monday agreed to take up on July 11 a petition filed by the Uddhav Thackeray faction challenging Speaker Rahul Narvekar’s decision to recognise the new party whip of rebel MLAs led by Chief Minister Shinde.

The winning of the trust vote paved the way for Shinde to cement his position as the Chief Minister as well as the leader of the Shiv Sena’s breakaway faction. Ahead of the floor test, another MLA from the Uddhav Thackeray camp, Santosh Bangar, joined Shinde’s faction, taking its tally to 40.

The trust vote came a day after BJP’s Narvekar was elected the Speaker. On Sunday, Narvekar reinstated Shinde as the Shiv Sena’s legislature party leader and also recognised the appointment of Bharat Gogawale as its chief whip. Three MLAs, Abu Azmi, Rais Shaikh (both of the Samajwadi Party) and Shah Farukh Anwar (AIMIM), abstained from voting. Eleven Congress MLAs, including former ministers Ashok Chavan and Vijay Wadettiwar, were absent during the trust vote. According to reports, Chavan and Wadettiwar came late and were unable to enter the House at the time of the vote. The NCP legislators absent from the House were Anil Deshmukh, Nawab Malik, Dattatray Bharane, Anna Bansode, Babandada Shinde and Sangram Jagtap. Deshmukh and Malik are currently in jail following their arrest in separate cases under the provisions of the PMLA.

BJP MLAs Mukta Tilak and Laxman Jagtap, both of whom are seriously ill, also did not come to the House. After the death of a Shiv Sena MLA recently, the current strength of the Assembly is reduced to 287, thus the majority mark is 144.

In the SC, senior counsel AM Singhvi argued before a vacation Bench led by Justice Indira Banerjee that the new Sena whip had been recognised in “violation of norms”. “The whip is someone the party nominates, not the legislature party,” he said.

I was suppressed for long time.... I almost became CM of the MVA alliance... rebellion is a fallout of the unfair treatment meted out to me. — Eknath Shinde, Maharashtra CM

Another MLA from the Uddhav Thackeray camp, Santosh Bangar, joined CM Eknath Shinde’s faction on Monday. With this, the strength of the Shinde camp has risen to 40.