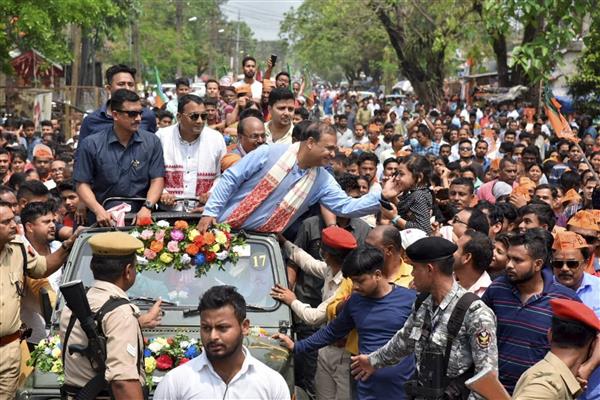 BJP leader Himanta Biswa Sarma during a roadshow for the Assam assembly polls, at Patacharkuchi in Bajuli district on April 1, 2021. PTI file photo

The Election Commission of India on Friday issued an order debarring Assam minister and Bharatiya Janata Party leader Himanta Biswa Sarma from campaigning for next 48 hours in the ongoing assembly elections of which polling for the two of three phases has been over. The third phase of polling in the state will take place on April 6.

The Bharatiya Janata Party leader has been debarred from campaigning in Assam and elsewhere for his alleged threatening remarks against opposition leader Hagrama Mohilary of the Bodoland People’s Front (BPF). The complaint against Sarma was lodged with the poll panel by the Congress, the BPF’s ally in Assam.

The Election Commission of India in its order said, responding the notice sent to him by poll panel Sarma denied the allegation, but the Commission “considered” the reply  and “the same was not found satisfactory”. His statement was “in prima-facie, violation of provisions of model code of conduct and therefore a notice dated 01.04.2021 was issued to him to explain his position” by on Friday evening.

“Now, therefore, the Commission hereby strongly condemns the impugned statements made by Himanta Biswa Sarma, BJP leader and star campaigner. The Commission, under Article 324 of the Constitution of India and all other powers enabling in this behalf, bars him from holding any public meetings, public processions, public rallies, road shows, interviews and public utterances in media (electronic, print and social media) etc. in connection with ongoing elections for 48 hours from immediate effect on 02.04.2021 (Friday).”