Elections must be fought on issue of development not caste or religion: Priyanka Gandhi : The Tribune India

Elections must be fought on issue of development not caste or religion: Priyanka Gandhi 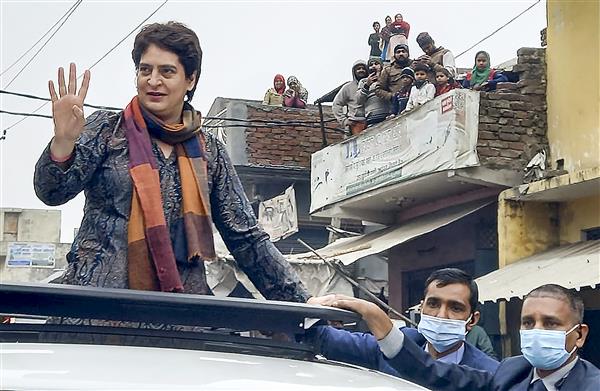 Congress leader Priyanka Gandhi Vadra on Thursday sought the support of the people of Bulandshahar for her party nominees in the coming assembly elections and stressed that elections should be fought on the issue of development and not caste or religion.

Priyanka Gandhi also met the family members of a woman who was shot dead in a village here. Her family alleged that she was also raped before being killed and they were forced to cremate her in a hurry.

A Congress spokesperson in Lucknow said Priyanka Gandhi has assured the family of all possible help in their fight for justice.

On a door-to-door campaign in Sikandarabad, Anupshahr and Syana assembly segments of Bulandshahar district of western Uttar Pradesh, the Congress general secretary was greeted with loud cheers and slogans as she moved about on the streets with party leaders.

In Sikandarabad, she was greeted by young girls carrying placards with “ladki hoon, lad sakti hoon” written on them while flower petals were showered on her from the rooftops while some locals clicked pictures and shot videos on their mobile phones.

Priyanka Gandhi interacted with the people and enquired about their problems. She also distributed her party’s manifesto, especially to women, and urged them to read it.

The Congress is contesting the assembly elections with the focus on women-related issues.

In an informal chat with newspersons, the Congress leader, who is leading the party’s campaign to revive the party in the state, said, “Elections should be fought on the issue of development not caste or religion. People here are also saying the same thing.” “People want to know (from the BJP) about the development work they have done, arrangements for employment or education or health. These must be the issues of the election,” she said.

Priyanka Gandhi was accompanied by local Congress leaders and party’s candidates for the upcoming polls. The door-to-door campaign in the district continued for over four hours.