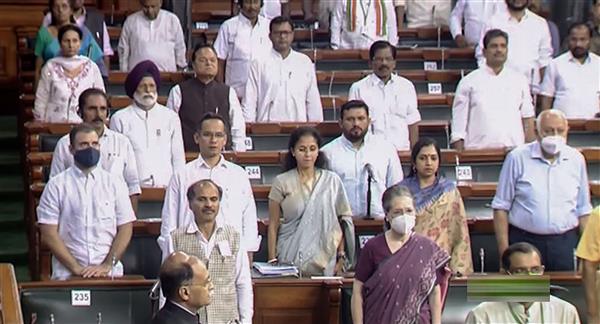 Parliamentarians on conclusion of the monsoon session. PTI

Hours before the two Houses of Parliament were adjourned sine die on Monday, four days ahead of schedule (August 12), the government introduced the contentious Electricity Amendment Bill-2022 in the Lok Sabha to enable the entry of private players in India’s power distribution landscape.

Tabled amid stiff opposition from the Congress, TMC, DMK and the Left, the Bill was referred to the Parliamentary Standing Committee on energy after Union Power Minister RK Singh made a related reference, terming the draft legislation “pro-people and pro-farmer” and accusing the Opposition of “false propaganda.” He said there was no provision in the Bill to cut power subsidies to farmers.

The Samyukta Kisan Morcha had recently warned the government against bringing this Bill, saying its withdrawal was one of the principal demands of the year-long farmers’ movement. “On December 9, 2021, the government, in a letter to the SKM, had said that there will be a discussion with all stakeholders on the provisions in the Electricity Amendment Bill, which affect farmers. No discussions have taken place,” the SKM had pointed out.

Congress leader in the Lok Sabha Adhir Ranjan Chowdhury referred to the Centre’s promise to the SKM today while MP Manish Tewari articulated the party’s concerns. “This Bill seeks to amend the Constitution through a statute and is beyond the legislative competence of this House. The amendment substantially weakens the power of the states by allowing multiple private agencies to distribute power in one place, paving the way for privatisation of profits and nationalisation of losses,” Tewari argued. He said under the Bill, the Centre had been empowered to issue licences to multi-state distribution companies with no consultation with states.

RSP’s NK Premachandran said the Bill would allow indiscriminate privatisation, was against the federal structure and violated the principle of consultation with states on a concurrent list subject. The Union Minister allayed these apprehensions.

Noting that the government had made a reference for the Bill to be sent to the Parliamentary Standing Committee for a wider debate, he explained: “This Bill does not cut any current subsidies being given to the farmers. On the Opposition’s objection to multiple licences in one place, this provision existed even in the parent law. They are making false statements to mislead the people. All states and stakeholders were consulted.”

This Bill does not cut current subsidies being given to farmers. Free power to farmers will continue. The Opposition is misleading the people. — RK Singh, Union Power Minister

20 hours ago
5
Punjab The Tribune Impact