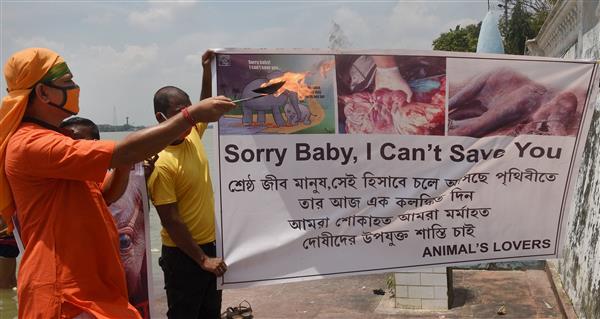 Animal lovers holding a banner pray for the pregnant wild elephant, which was killed in Kerala, at the bank of River Ganga in Kolkata. PTI photo.

In a major breakthrough in the case relating to the death of a pregnant wild elephant in Kerala, one person was arrested on Friday.

“One person was arrested today. There are more accused in the case and efforts are on to nab them," Kerala Forest Minister K Raju told reporters.

Forest and police officials are conducting a joint probe into the elephant’s death and a ‘very fruitful investigation’ is going on, he said.

The Kerala Forest Department in a tweet said: “KFD has zeroed in on the culprits and recorded the first arrest in the wild elephant death case”.

The incident had triggered a national outrage, with Union Environment Minister Prakash Javadekar and BJP MP and former union minister Maneka Gandhi, among others, reacting to it.

Forest department sources had said yesterday that three people were under the scanner of the joint investigation team of their personnel and Kerala police and a search was on for two more people.

The department had said that there was no conclusive evidence that the injury to the elephant’s lower jaw was caused by a pineapple stuffed with crackers and “it might be a possibility.”

The 15-year-old elephant is suspected to have consumed a pineapple filled with powerful fire crackers which exploded in its mouth in the Silent Valley forest.

It died in the Velliyar River a week later on May 27.

The pachyderm’s tragic end came to light after a forest officer posted an emotional note on his Facebook page, narrating it. —PTI