Emergency landing strip on NH for IAF near Pak border 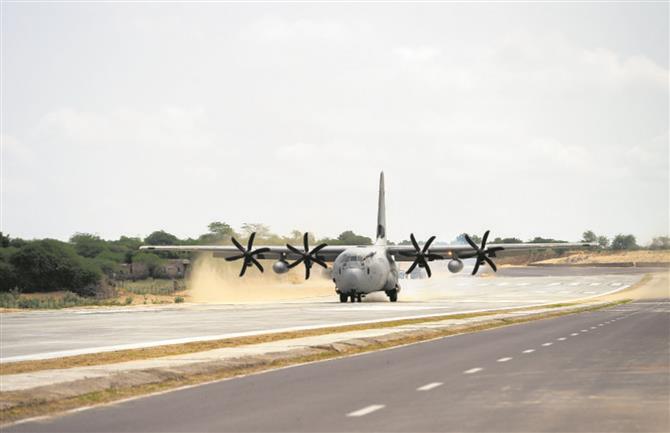 On a day when the Indian Air Force (IAF) demonstrated its ability to land a C-130 J transport plane on a specially paved section of a national highway in Rajasthan, Union Road Transport and Highways Minister Nitin Gadkari said similar emergency landing facilities would be developed at 19 other highways across the country.

At another event in Rajasthan, the first Firing Unit of Medium Range Surface to Air Missile (MRSAM) System was handed over to the IAF in the presence of Rajnath Singh at the Air Force Station, Jaisalmer. The MRSAM is an advanced network centric combat Air Defence System developed jointly by the DRDO and Israel Aerospace Industries.

On Wednesday, the IAF Chief told me it took 1.5 years to develop this strip (in Barmer).... Now, we will develop good quality landing strips within 15 days instead of 1.5 years — Nitin Gadkari, Union road transport and highways minister

Inaugurating the three-km-long emergency landing facility on the NH-925A at Barmer, about 40 km from the Pakistan border, with Defence Minister Rajnath Singh, Gadkari said: “This highway-runway will strengthen the country’s security in protecting the strategically important borders.”

According to an official statement, Gadkari said roads at 19 other places in the country would have such landing facility for the IAF. These will include Phalodi-Jaisalmer road and Barmer-Jaisalmer road in Rajasthan, Kharagpur-Balasore road in West Bengal, Hashimara-Guwahati road in Assam, Bhuj-Naliya road in Gujarat, Leh/Nyoma area in Ladakh and the Jorhat-Baraghat road, among others.

A Hercules C-130J plane of the IAF, carrying Rajnath and Gadkari, conducted a mock emergency landing on the national highway on Thursday. The two ministers also witnessed multiple aircraft operations on the emergency landing facility.

In October 2017, fighter jets and transport planes of the IAF had conducted mock landings on the Lucknow-Agra Expressway to show that such highways can be used by the IAF planes for landing in case of an emergency.