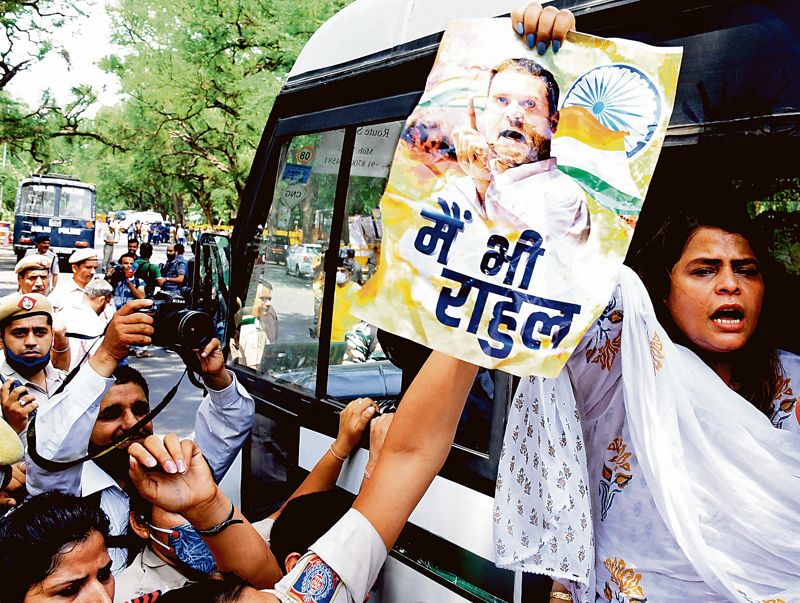 Police detain Mahila Congress workers during a protest outside the AICC office in New Delhi on Wednesday. Photo: Mukesh Aggarwal

The Enforcement Directorate questioned Congress leader Rahul Gandhi for the third straight day over money laundering allegations in the National Herald case even as the opposition Congress intensified its attack on the government “warning it against impeding political activities of party workers by preventing their entry to the AICC headquarters”.

Rahul’s written statement is being recorded under the Prevention of Money Laundering Act. ED sources said today’s interrogation began at 12 noon with the entire process videographed and audio recorded over three days. “The statements, typed on A4 size papers, are being “minutely reviewed and signed by Rahul” before submission to the investigating officers,” sources say.

Rahul was quizzed for about eight hours today. He has so far faced ED for about 24 hours. The ED summoned Rahul for the fourth time on Friday. Sources said a detailed statement by Rahul on his role was a crucial part of the investigation, as he was a “major shareholder” in the Young Indian company (alleged to have usurped Rs 2,000 crore assets of Associated Journals which publishes National Herald) and an “important person” in the AJL and Herald affairs.

The Congress has demanded FIRs against Delhi cops for ‘criminal trespass’ of the party office with AICC general secretary Randeep Surjewala alleging that Delhi police personnel barged into the headquarters gates and assaulted leaders and workers. Footage of some cops rushing into the AICC gates also went viral. Denying the allegations that its personnel forcibly entered the AICC headquarters and beat up party workers, a Delhi Police officer said these were ‘totally false’.

The Congress on Wednesday sent a ‘cease and desist’ notice to the government with copies to the Chief of Enforcement Directorate and Registrar of the Supreme Court, asking for alleged media leaks of party leader Rahul Gandhi’s ongoing questioning by the investigating agency to be stopped forthwith.