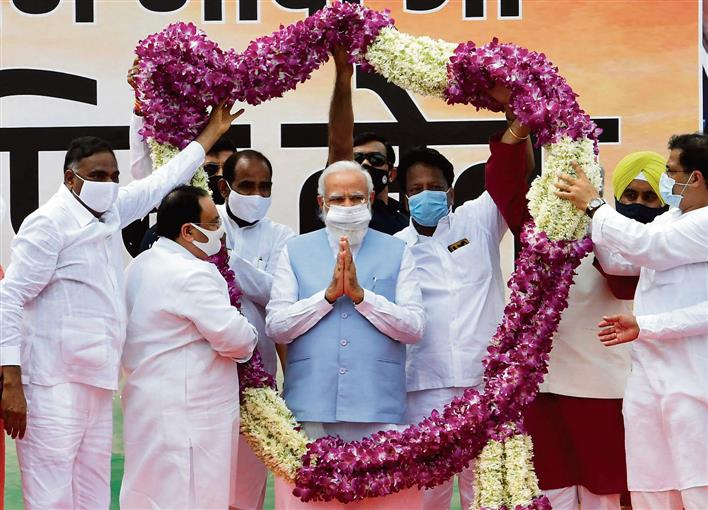 Prime Minister Narendra Modi on Sunday urged people to keep following Covid protocol and ensure that no one is left out of vaccination’s “circle of safety”.

In his monthly “Mann Ki Baat” radio broadcast, the PM also said common people were getting connected to digital transactions through fin-tech Unified Payments Interface (UPI) and its prevalence was increasing.

Noting that the festival season is approaching, Modi said when the whole country would celebrate “Maryada Purshottam” Shri Ram’s victory over untruth, people should also remember the fight against Covid.

He also underlined the significance of rivers on World Rivers Day, saying they are organically related to India’s ancient heritage and culture.

He called for collective efforts to keep rivers pollution-free. “As we celebrate World Rivers Day today, I urge the people across the country to mark a ‘river festival’ at least once a year,” he added.

Referring to government steps to rejuvenate the rivers, he said “Namami Gange” project has become people’s movement. “It is true that technology can help a lot in economic cleanliness. It is a matter of delight for us that even in villages, the common person is getting connected in the direction of digital transactions through fin-tech UPI and its prevalence is increasing,” Modi said.

Today, on an average, digital payments of more than Rs 6 lakh crore are happening through UPI, he said.

He said hoisting of Tricolour at “Kumar Post”, the highest peak (15,000 ft) of Siachen Glacier, by an eight-member team of specially abled was inspirational.

Lauding startups related to the farming sector, he mentioned Bilal Ahmed Sheikh (39) and his brother from Pulwama. The Sheikh brothers produced vermicompost.

New Delhi: Prime Minister Narendra Modi was accorded a rousing welcome by BJP members at Delhi’s Palam Technical Airport with party president JP Nadda hailing him as a global leader, who has made India a “global player” with his “strong and frank” opinion on variety of issues at global platform. TNS