Era of expansionism over, PM calls out China 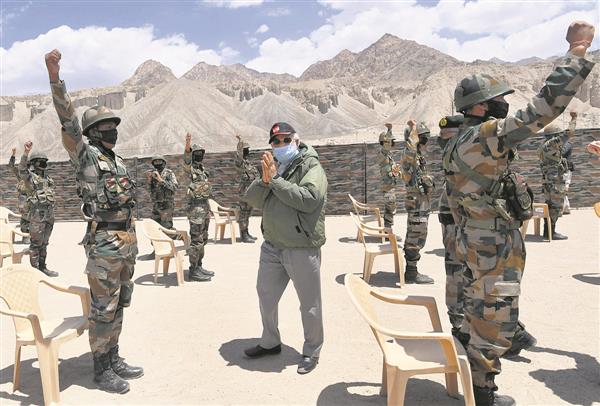 Prime Minister Narendra Modi’s surprise early Friday visit to Ladakh marked a historic first as he sent out an unequivocal message directed at China with a declaration that the “era of expansionism is over” and that the Indian soldiers have demonstrated to the world the country’s strength by displaying their “fire and fury”.

Edit: Russia on board

The PM’s visit came amid a prolonged standoff between Indian and Chinese troops in eastern Ladakh, especially after the June 15 violent clashes in the Galwan valley that left 20 Indian soldiers dead.

In an address to troops, Modi paid tributes to the fallen soldiers and said tales of the bravery and valour of the armed forces were echoing in every part of the country.

‘Enemies tasted fire and fury of our soldiers’

The bravery of 14 Corps will be talked about everywhere.

Tales of your bravery and valour are echoing in every house across the country.

Hailing the bravery of soldiers as “unparalleled”, the PM said the “enemies of India had seen fire and fury of our forces”. Simultaneously, he reminded China, without naming it, the “era of expansionism is over”, in a clear declaration that any misadventure of transgressing the Indian territory would not be tolerated. He asserted bravery was a prerequisite for peace and that the weak could never accomplish it.

The PM’s visit to Nimu began with a strategic review of the situation in eastern Ladakh. XIV Corps Commander Lt Gen Harinder Singh gave the PM a first-hand account of the three rounds of Commander-level talks held with Chinese counterpart Major General Liu Lin in Chushul and Moldo over the past one month.

Chief of Defence Staff Bipin Rawat and Army Chief Gen MM Naravane, who accompanied the PM from Delhi, were part of the review meeting. PM’s tone was passionate and full of messages, particularly to China and Pakistan that border Ladakh. While reflecting on the Galwan valley clashes, the PM said “due to the exemplary bravery of our armed forces in the recent weeks, the world has taken note of India’s strength”.

He sought to dispel any false notion about the country, saying India’s commitment to peace should not be seen as a weakness. He invoked Lord Krishna, saying: “We are the same people who pray to the flute-playing Lord Krishna, but we are also those who idolise the same Lord Krishna who carries the ‘Sudarshana Chakra’.”

The PM later visited a military hospital in Leh where he interacted with soldiers injured in the clashes.

Chinese troops have created a war-like situation because of their actions in the Galwan valley, Hot Springs, Pangong Tso and other areas in eastern Ladakh. These are seen as part of Beijing’s expansionist designs as it has not retreated to the April 2020 position despite military and diplomatic talks.

China under Xi agressive towards India: US report

China under Xi Jinping has stepped up its ‘aggressive’ foreign policy towards India and ‘resisted’ efforts to clarify the LAC that prevented a lasting peace from being realised, says a US Congress-appointed commission report. “Since 2013, China has engaged in five major altercations with India along the LAC,” it said. PTI

Power Minister RK Singh on Friday said India will not import electricity equipment from China, amid the ongoing border standoff. Equipment import from China and Pakistan would not be permitted, he said, while asking state discoms not to place orders for supply of equipment with Chinese firms. PTI

In a strong support to India over the LAC standoff, Japan on Friday said it opposed ‘any unilateral’ attempts to change the status quo in the region. After a meeting with FS Harsh Vardhan Shringla, Japanese Ambassador Satoshi Suzuki said they hoped for peaceful resolution of the row through talks. PTI