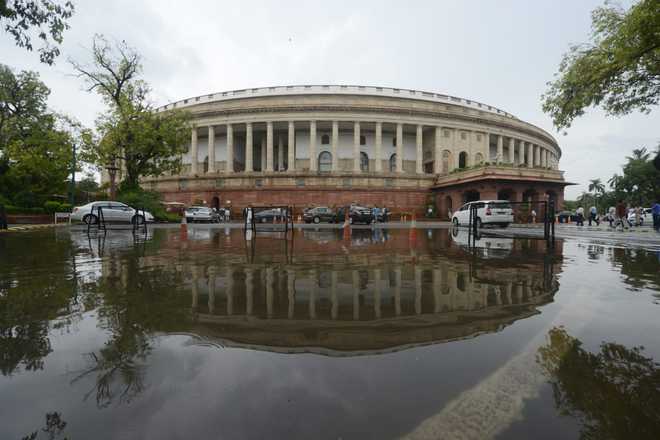 The government on Thursday introduced two bills in Lok Sabha amid din over Pegasus row and farmers’ issues.

Shipping and Ports minister Sarbanand Sonowal introduced The Inland Vessels Bill, 2021, to promote transport through inland waters, safety of navigation, protection of life and cargo and prevention of pollution, ensure transparency of administration of inland water among other things.

Presiding officer Bhartruhari Mahtab called out the names of Opposition MPs who had objected to the introduction of the bill but some were absent and some were not in their seats to flag their concerns as they were protesting in the Well. These MPs were K Suresh, Manish Tewari, Heibi Eden, Adhir Ranjan Chowdhury and MK Raghavan.

RSP’s NK Premchandran opposed the introduction of The Essential Defence Services Bill, 2021 saying it seeks to prohibit the workers’ legitimate right to strike guaranteed under the Indian industrial laws and the ILO conventions.

“This bill seeks to cut down democratic rights of workers. Why introduce it when the house is not in order?” Premchandran asked.

Other MPs who had given notices to oppose the bill were not in their seats to oppose it — including Manish Tewari, Saugata Roy, Adhir Ranjan, Gaurav Gogoi and Shashi Tharoor.

“There no intention in the bill to trouble anyone. Interests of workers have been fully protected,” he said introducing the bill by a voice vote.