Every individual must be made aware of their rights, duties: CJI Ramana : The Tribune India

Every individual must be made aware of their rights, duties: CJI Ramana 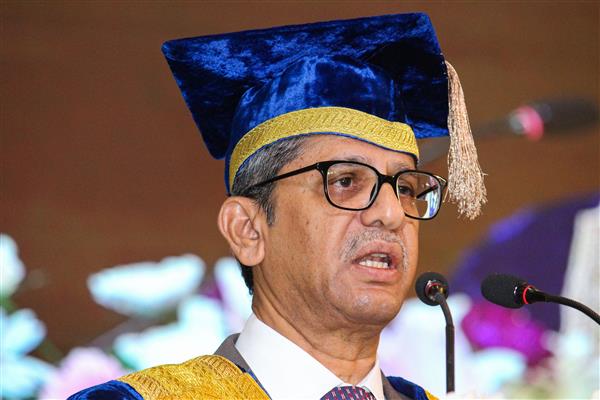 Noting that the Constitution is meant for every citizen and every individual must be made aware of their rights and duties, Chief Justice of India NV Ramana on Sunday said a constitutional republic shall thrive only when its citizens are aware of what their Constitution envisages.

Addressing the fifth convocation of Hidayatullah National Law University (HNLU) at Raipur, the CJI said, “We have a collective duty to promote constitutional culture and raise awareness. It should be your endeavour to explain the constitutional provisions in simpler terms and assimilate its ethos into the minds of the people.”

Describing law as an instrument of social change, the CJI said law school education must turn graduates into social engineers. It should be the endeavour of the law graduates to explain to the people the constitutional provisions in simpler terms, he added.

“This generation of youngsters is taking the world by revolution. Be it the climate crisis or violation of human rights, they are a united force across the world. Truly, the technological revolution has made each one of us global citizens,” the CJI said, exhorting them to join the revolution.

Highlighting the role of youth in achieving social transformation through the rule of law and the Constitution, Justice Ramana said, “The sad reality is that the supreme document which defines the aspirations of modern independent India is confined to the knowledge of law students, legal practitioners, and a very small segment of the Indian population.”

He urged the budding lawyers to take up as many pro-bono cases as possible. “In your chase for material wealth, do not forget the power of change that lies within you. You must have a vision of the world you want to live in. But a vision is not enough. You must create it by standing up and fighting for it,” the CJI said.

“...A lawyer is not a mere representative before the court. Simply knowing a statute will not help you in the long run. Your clients may expect you to be aware about different facets of business, society or even sports. A lawyer needs to be an all-rounder, a leader and a change-maker. Remember that new ways of thinking may invite criticism. But do not allow such criticism to bother you,” Justice Ramana added.