The BJP, however, said what the 85-year-old Congress leader said was not true 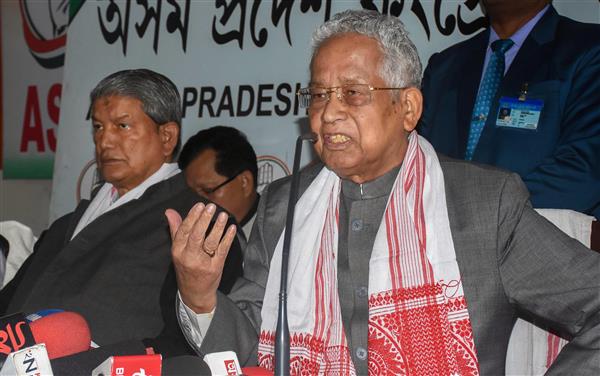 The BJP, however, denied the former three-time state chief minister’s assertion on Ranjan Gogoi, who was nominated as a Rajya Sabha member by the government in March.

If the former CJI could go to the Rajya Sabha, he might also agree to be the next chief ministerial candidate of the BJP in Assam, said Tarun Gogoi.

“I have heard from several sources that Ranjan Gogoi’s name is there in the list of BJP candidates for the chief minister’s post. I suspect that he might be projected as the next possible chief ministerial candidate,” he said.

Ranjan Gogoi, who is the son of former Assam CM Kesab Chandra Gogoi, could have easily become the chairman of the Human Rights Commission or other rights bodies, but he accepted the Rajya Sabha membership as “he has political ambition”, the Congress leader claimed.

“The BJP was happy with Ranjan Gogoi for the Ayodhya land dispute case judgment. It won’t be surprising if he agrees to be the next CM candidate for the BJP,” Tarun Gogoi said on Saturday.

Gogoi headed a bench which delivered the verdict in the Ram Janmabhoomi-Babri Masjid case that gave Hindus the 2.77-acre disputed land for construction of Ram temple and directed that Muslims be given a 5-acre land at a “prominent location” to build a mosque in the city.

The BJP, however, said what the 85-year-old Congress leader said was not true.

“People say many meaningless things when they become very old. There is no truth in what Tarun Gogoi said about the former CJI becoming the BJPs chief ministerial candidate,” the saffron party’s state unit president Ranjeet Kumar Dass said.

Tarun Gogoi also said he was not going to be the chief ministerial candidate of the Congress.

“I will contest the elections but I will not be the chief ministerial candidate. There are several qualified candidates in the party for that. I can only be a guiding force or act as an advisor,” he said.

A common candidate can also be projected from the proposed ‘grand alliance’ comprising the Congress, the AIUDF, the Left and other like-minded political parties, he said. PTI