The two exchanged repartees,which engaged the attention of the Members cutting across party lines in the House, including Chairman Venkaiah Naidu 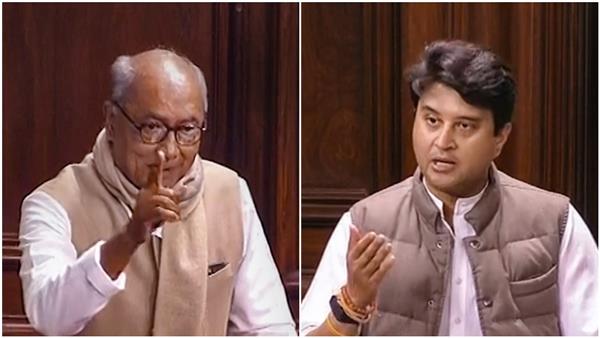 The Rajya Sabha on Thursday witnessed a juicy face-off between between the BJP and the Congress through Jyotiraditya Scindia and Digvijaya Singh on the second day of the discussion on Motion of Thanks on the President’s Address.

Scindia, who spoke first, put up a stout defence of the Union Government, including on the three farm laws, measures against the COVID-19 pandemic and its vision of aspirational India under the leadership of Prime Minister Narendra Modi.

Digvijaya Singh, who spoke immediately after, tore into government and questioned Modi on several counts.

The two exchanged repartees,which engaged the attention of the Members cutting across party lines in the House, including Chairman Venkaiah Naidu.

Scindia had junked the Congress last year to join the BJP and help the saffron party form a government in Madhya Pradesh by toppling the Congress dispensation.

Both are stalwarts from the state and have pan-India image profiles.

Known also for his oratorical skill, Scindia was the centre of attraction when he entered the precincts of Parliament today as he was among the list of speakers from the BJP in the House today.

His tone and tenor during his speech against the Congress and the way he would defend the government, was a subject of speculations.

This was in the backdrop of his close association with Sonia Gandhi and Rahul Gandhi during his days in the Congress, and the way he assisted them in the Lok Sabha through his witty rebuttal and observations on the BJP-led NDA.

Taking the floor, he flayed the Opposition parties for raising questions against the government on its policies, including against the COVID-19 pandemic.

On Opposition parties’ charge that imposition of the national lockdown imposed was sudden and undemocratic, he took a jibe at the Congress, saying the questionable lockdown was the “Emergency”, which was declared by Indira Gandhi-led Congress government in 1975.

“I used to say this even when I was on that side,” Scinda said referring to the times when he was in the Congress.

“...You should not hide from the truth,” he said when objected from the opposition benches.

He said India fought with its two weapons against the pandemic:visionary leadership of the Prime Minister and its collective resources.The country’s push back against the disease had been acknowledged also by the WHO, he added.

“Due to the government’s intervention through five mini-budget for relief and rehabilitation during the lockdown, and the Union Budget 2021-22, the country is poised for a great economic recovery,” Scindia said.

He questioned the Opposition leaders for casting doubts on efficacy of the two indigenous vaccinations against the coronavirus.

He lauded the abrogation of Article 370 relating to Jammu and Kashmir, saying the provision promoted corruption and deprivations of rights of a section of the people.

Scindia said following scrapping of special status to Jammu and Kashmir had facilitated its integration with the national mainstream. The DDC elections had been held for the first time, he added.

With regard to the farm laws, he said the Congress and other Opposition parties were adopting double standards.

“The Congress, in its 2019 General Election manifesto, had promised to do away with the APMC Act,” he added.

He condemned the violence in the name of farmers protest on Republic Day.

Singh, on his turn, questioned Modi’s leadership, including the decision of demonitisation, the abrogation of Article 370 and the three farm laws, among others.

He questioned the arrests of leaders of Kashmir following the abrogation of Article 370, and slapping of criminal cases against farmers and journalists during the ongoing protest against the farm laws.

Singh said farm laws were passed the in Rajya Sabha without following the procedures.

He said: “The Centre failed to take timely action against COVID-19 in order to host the then US president, Donald Trump, and to topple the Congress government and form its government in Madhya Pradesh.”