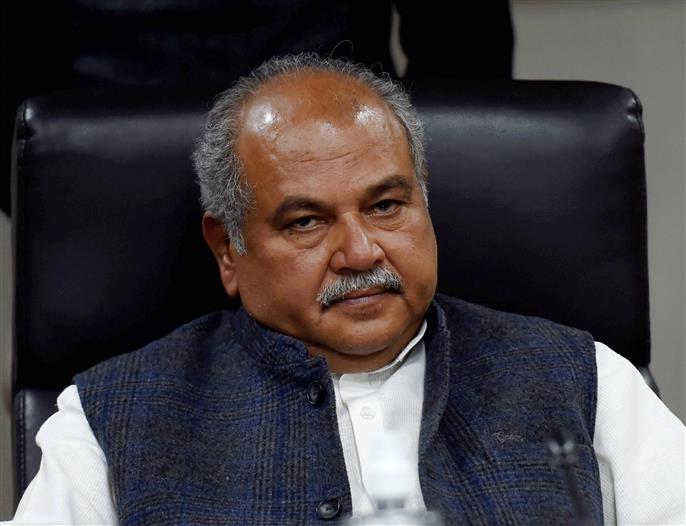 Agriculture Minister Narendra Singh Tomar on Friday welcomed Prime Minister Narendra Modi’s decision to repeal the three farm laws but expressed regret that the government was unsuccessful in convincing some farmer groups about the benefits of the laws.

Noting that the latest decision is much appreciated, Tomar said it is also a reflection of the prime minister’s reverence and spirit of brotherhood as today also happens to be Guru Nanak Jayanti.

The prime minister has always kept the nation’s interest and public sentiment above everything else and the decision also shows his large heartedness, Tomar said in a series of tweets.

The formation of the committee is also a sign of the prime minister’s long-term vision towards agriculture as well as his sensitivities towards farmers, Tomar said.

In a video message, the agriculture minister said the government wanted to remove restrictions being faced by the farming community by bringing three new farm laws.

These laws, which were passed by Parliament last year, would have definitely benefited farmers, he said and added that the prime minister’s intention behind these laws was to bring a “revolutionary change” in the lives of farmers.

“I am sad that we were not successful in convincing some farmers about the benefit of these laws,” Tomar said.

The prime minister always tried to bring changes in the farm sector through these laws. But such situation arose that some farmers found problems in these laws. The government adopted the path of dialogue to discuss logically, he noted.

“We tried to convince but we’re not successful,” the minister said, adding that the government has been committed to agriculture and farmers welfare since last seven years.

Tomar also highlighted various schemes and programmes launched since 2014 for the agriculture sector.

The government has decided to fix the MSP at least 1.5 times of the cost of production and procurement has doubled, he said.

To support small farmers income, the government has launched the PM-KISAN scheme under which Rs 1.62 lakh crore has been disbursed to farmers so far.

Crop loan has been doubled in last seven years, while the kisan credit card coverage has also been expanded. About Rs 1 lakh crore infrastructure fund has also been established, he added.

The Farmers’ Produce Trade and Commerce (Promotion and Facilitation) Act is aimed at giving freedom to farmers to sell their produce outside the mandis. The Farmers (Empowerment and Protection) Agreement of Price Assurance and Farm Services Act is to provide farmers the right to enter into a contract with agribusiness firms, processors, wholesalers, exporters, or large retailers for the sale of future farming produce at a pre-agreed price.

The Essential Commodities (Amendment) Act was implemented to remove commodities like cereals, pulses, oilseeds, onion, and potatoes from the list of essential commodities and also do away with the imposition of stock holding limits on such items except under ‘extraordinary circumstances’.

Now, the government has decided to repeal these three laws during the winter session of Parliament scheduled to start from November 29. PTI