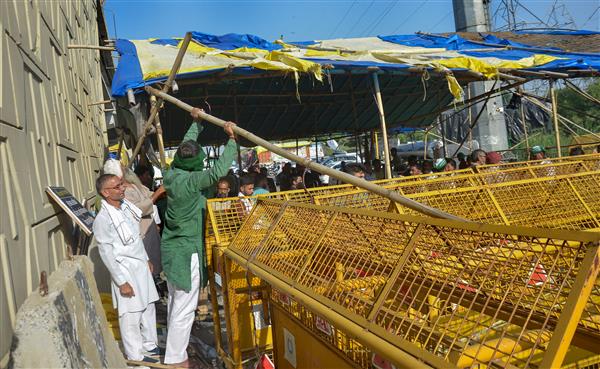 Farmers remove barricades from a road leading to Delhi near Ghazipur border picket site after the orders of the Supreme Court in Ghaziabad, on Thursday, October 21, 2021. PTI

The Supreme Court on Thursday gave three weeks to farmer bodies to respond to a petition seeking directions to the authorities to end blockades of roads connecting NCR regions to the national capital by farmers protesting against farm laws.

A Bench led by Justice Sanjay Kishan Kaul - which had on September 30 wondered how highways can be blocked perpetually - posted the matter for December 7.

“I am not averse to their right to protest even when a legal challenge is pending. But roads can’t be blocked…Ultimately some solution has to be found,” Justice Kaul noted.

On Thursday, it clarified it was not concerned with any of the larger issues and that the only thing it was looking into was that in view of its earlier orders roads should not be continuously occupied.

The Bench said after the parties filed their replies, it would decide whether to pass orders or to club it with other matters pending before a different Bench.

It was hearing a petition filed by Monicca Agarwal, a resident of Noida, on the issue. Agarwal, a single parent with some medical issues, alleged that due to blockade of roads by the agitating farmers, travelling between Noida and Delhi was taking two hours instead of the usual 20 minutes and that it had become a nightmare to commute.

Another Bench led by Justice AM Khanwilkar is dealing with a plea by the Kisan Mahapanchayat seeking directions to the Centre, Delhi Lt Governor and Delhi Police Commissioner to allow it to stage ‘satyagraha’ at Jantar Mantar in the national capital.

"You have strangulated the entire city, now you want to come inside the city and start protesting again here…The residents around..are they happy with the protest? This business should stop. You are obstructing security and defence personnel. This was in the media. All this should stop…There has to be a balanced approach,” Justice Khanwilkar had told the counsel for the Kisan Mahapanchayat on October 1.

“There is no point in protest once you come to the court challenging the laws,” it had told the farmers’ body.